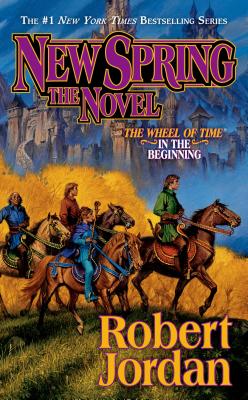 For three days battle has raged in the snow around the great city of Tar Valon. In the city, a Foretelling of the future is uttered. On the slopes of Dragonmount, the immense mountain that looms over the city, is born an infant prophesied to change the world. That child must be found before the forces of the Shadow have an opportunity to kill him.

Moiraine Damodred, a young Accepted soon to be raised to Aes Sedai, and Lan Mandragoran, a soldier fighting in the battle, are set on paths that will bind their lives together. But those paths are filled with complications and dangers, for Moiraine, of the Royal House of Cairhien, whose king has just died, and Lan, considered the uncrowned king of a nation long dead, find their lives threatened by the plots of those seeking power.

New Spring begins Moiraine and Lan's quest to find the Dragon Reborn that will lead to the events of The Eye of the World...and their fateful meeting with Rand al'Thor. New Spring is a perfect jumping-on point for fantasy readers wanting to know more about The Wheel of Time.

Praise for The Wheel of Time


“The battle scenes have the breathless urgency of firsthand experience, and the… evil laced into the forces of good, the dangers latent in any promised salvation, the sense of the unavoidable onslaught of unpredictable events bear the marks of American national experience during the last three decades.” – The New York Times on The Wheel of Time


“Has all the breadth and depth that have made this fantasy author one of the acknowledged greats of this genre.” – Publishers Weekly on Crossroads of Twilight


“His writing is distinguished… by the richness of its fabric, with all the charm and naïveté of the Brothers Grimm and the social/moral commentary of Huxley’s Brave New World. With his well fleshed out characters, dark imagery, comic relief, vivid landscapes, and a fascinating sense of timelessness, Jordan has created a complex literature with a language and reality all of its own.” -- Bookpage


“Throughout Jordan’s preeminent high-fantasy saga… the characters (minor as well as major), the world, and the source of powers have remained remarkably rich and consistent—no mean feat… Amid all the Sturm and Drang, however, is finely tuned comic strain that both leavens the story and adds to its development. A major fantasy epic.” – Booklist


“Truth is not only stranger, it’s richer than fiction, but Jordan’s fictional universe approaches the variety and complexity of the real… Plotlines [are] strummed with resonating long-wave rhythms something like Beethoven’s Eroica.” – Robert Knox, MPG Newspapers


“Adventure and mystery and dark things that move in the night-- a combination of Robin Hood and Stephen King that is hard to resist… Jordan makes the reader care about these characters as though they were old friends; so much so that the reader will put down the book regretting the wait for the next title in the series.” – Milwaukee Sentinel


“The Wheel of Time [is] rapidly becoming the definitive American fantasy saga. It is a fantasy tale seldom equaled and still less often surpassed in English.” – Chicago Sun-Times


“In the decades since J.R.R. Tolkien’s Lord of the Rings trilogy was published, many fantasy writers have tried to capture the spirit of that seminal work. While many have been able to imitate the style, develop as similarly swift and complex plot, and create convincing characters, none had captured the spirit of small men and mighty, struggling against a force of overwhelming evil. Robert Jordan has.” – The Ottawa Citizen


“Jordan has a powerful vision of good and evil—but what strikes me as most pleasurable… is all the fascinating people moving through a rich and interesting world.” – Orson Scott Card


“Jordan can always be counted on to ground his dizzying intrigues in solid chunks of cultural detail, and he here rises to the occasion, with chapters as dense as Spenserian stanzas with symbols and rituals… He manipulates the disorder of this narrative to credibly convey a sense of an embattled world on the verge of self-destruction, and he entertainingly juxtaposes the courtly civility of his villains with the precarious chaos they cause.” – Publishers Weekly


“Jordan continues to utilize his towering imagination to construct plots of incredible ingenuity and develop themes hidden, sometimes quite deeply, in earlier installments. As ever, Jordan writes intelligently and lyrically—one of the most literary exponents of the genre.” – SFX Magazine


“Beware, there is magic in these books. They are liable to make you neglect your work and keep you up way past your bedtime… This is the genuine article.” – John Lee, Suffolk County News


“Jordan’s characters [are] fleshed out with the strengths and weakness of real men and women… Invokes the end-of-the-world milieu of Stephen King’s The Stand.” – The Post and Courier (Charleston, South Carolina)


“Jordan writes with the stark vision of light and darkness, and sometimes childish sense of wonder, that permeates J.R.R. Tolkien’s works. His style is undebatable his own.” – The Pittsburgh Press


“[The Wheel of Time] will be the definitive American exploration of Tolkien’s territory for many years to come. Jordan can spin as rich a world and as event-filled a tale as the master, and the presence of women and a certain sense of comic possibilities of a high destiny add further dimension to the work.” – Booklist


“Jordan’s multivolume epic continues to live up to its high ambitions. Complex plotting, an array of strong characters, lavish detail, and a panoramic scope make this series a feast for fantasy aficionados… Richly detailed and vividly imagined.” – Library Journal


“Jourdan’s writing is clear and his vision is fascinating, as are the philosophies which run his characters. And speaking of characters, a more interesting bunch I would be hard put to name.” – Science Fiction Review


“The most ambitious American fantasy saga The Wheel of Time, [may] also be the finest… [It] surpasses all but a few of its peers.” –Booklist


“The complex philosophy behind The Wheel of Time series is expounded so simply the reader often gives a start of surprise at returning to the real world. Rand’s adventures are not finished and neither is this thinking person’s fantasy series.” – Brunswick Sentinel (Australia)


“Intricate allegorical fantasy recalls the works of Tolkien because of its intensity and warmth.” – Publisher’s Weekly


“Robert Jordan can write one hell of a story… [He] keeps the suspense acute and the surprises and invention beautifully paced. Compelling. An exhilarating experience.” – Isaac Asimov’s Science Fiction Magazine


“[The Wheel of Time is] a work of genuine and often stirring imagination.” – Kirkus Review


“Jordan’s talent for sustaining the difficult combination of suspense and resolution, so necessary in a multivolume series… is nothing short of remarkable.” – Library Journal


“Jordan has not merely put old wine into new bottles: He has clothed old bones with new flesh.” – Chicago Sun-Times

“This is The Wheel of Time at its best: political intrigue, powerful characters, dangerous magic, and even more dangerous secrets.” —Bookpage

“Jordan is the master of his domain.” —The Post and Courier, Charleston, SC