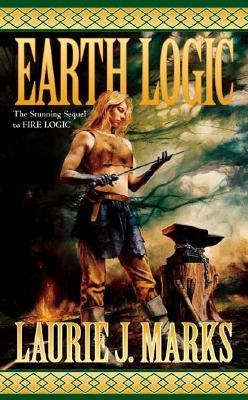 A sweeping drama of war, intrigue, magic, and love

With Earth Logic, Laurie J. Marks continues the epic of her stunningly imagined world of Shaftal, which she first introduced in Fire Logic.

Shaftal has a ruler again, a woman with enough power to heal the war-torn land and expel the invading Sainnites from Shaftal. Or it would have a ruler if the earth witch Karis G'deon consented to rule. Instead, she lives in obscurity with the fractious family of elemental talents who gathered around her in Fire Logic. She is waiting for some sign, but no one, least of all Karis herself, knows what it is.

Then the Sainnite garrison at Watford is attacked by a troop of zealots claiming to speak for the Lost G'deon, and a mysterious and deadly plague attacks the land, killing both Sainnites and Shaftali. Karis must act or watch her beloved country fall into famine and chaos. And when Karis acts, the very stones of the earth sit up and take notice.

Laurie J. Marks is a third-generation Californian who came to Massachusetts to go to graduate school and never left. She earned a BA from Brown University and an MA from Northeastern University.

Before settling down to teach composition, creative writing, and science fiction at the University of Massachusetts, Boston, she worked with an anti-poverty program in Mexico, was a crisis counselor in domestic violence and rape intervention, and administered and designed programs for a county-wide literacy agency. She serves on the steering committee of Broad Universe, and is a member of SFFWA and the National Council of Teachers of English.

She lives in Melrose, Massachusetts.
Loading...
or
Not Currently Available for Direct Purchase