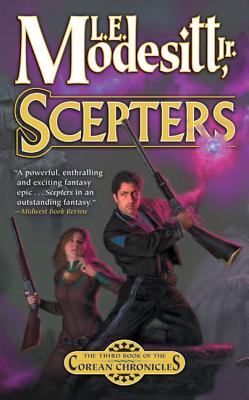 The Third Book of the Corean Chronicles

Scepters, book three of the Corean Chronicles, continues the epic fantasy series by L. E. Modesitt, Jr., author of the bestselling Saga of Recluce. Enter this new and exciting world.

Millennia ago, a magical disaster caused the fall of a civilization, the end of a golden age. New civilizations emerged from the ancient destruction and chaos, knowing little of the past or the disaster. Corus today is a world of contending countries, humans, and supernatural creatures. It is a place of magical powers, and of a few people who are talented enough to use them.

Alusius has been pulled into another war. He must first quell a strange religiously-inspired rebellion and then find a way to destroy the powerful weapons of ancient design, again being used by the forces of Madrien. Now a different, covert enemy threatens, but his talent may not be enough to tip the balance.

Other series by this author:
The Saga of Recluce
Imager Portfolio
The Spellsong Cycle
The Ghost Books
The Ecolitan Matter


Praise For Scepters: The Third Book of the Corean Chronicles…

“An intriguing blend of martial fantasy and SF . . . [with] vivid and inventive magic.” —Publishers Weekly