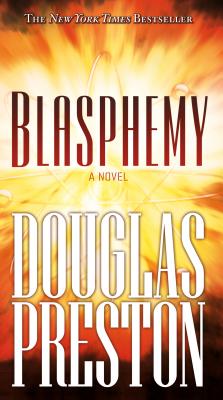 In Douglas Preston's Blasphemy, the world's biggest supercollider, locked in an Arizona mountain, was built to reveal the secrets of the very moment of creation: the Big Bang itself.

The Torus is the most expensive machine ever created by humankind, run by the world's most powerful supercomputer. It is the brainchild of Nobel Laureate William North Hazelius. Will the Torus divulge the mysteries of the creation of the universe? Or will it, as some predict, suck the earth into a mini black hole? Or is the Torus a Satanic attempt, as a powerful televangelist decries, to challenge God Almighty on the very throne of Heaven?

Twelve scientists under the leadership of Hazelius are sent to the remote mountain to turn it on, and what they discover must be hidden from the world at all costs. Wyman Ford, ex-monk and CIA operative, is tapped to wrest their secret, a secret that will either destroy the world…or save it.

“Highly recommended... Preston joins Michael Crichton as a master of suspenseful novels that tackle controversial issues in the realm of science.” —Library Journal

“An unusually alarming and thoughtful thriller... Clever and terrifying.” —Kirkus

“A superb read! Blasphemy is both thoughtful and flat-out entertainment--a page-turning thriller about science and religion in which good and evil collide at the speed of light. You'll be up all night with this book.” —Jeffery Deaver, New York Times bestselling author of The Sleeping Doll

“Science versus religion--the ultimate crunch. Douglas Preston has written The Novel of the Year, an extraordinary, unique, fascinating, wildly imaginative mix of thriller, satire, Sci Fi, and every other genre in the book. Blasphemy--you're going to love it.” —Stephen Coonts, New York Times bestselling author of The Assassin

“With Blasphemy, Douglas Preston has finally gone too far. One way or another, I'm afraid he may burn for this book.” —Lincoln Child, New York Times bestselling author of Deep Storm

“Blasphemy takes the latest theories of physics and pits them against the ancient religious beliefs that they now threaten, in an explosive, hell-bent and finally deeply moving book that I doubt I will ever forget. It literally made me pace as I contemplated the ideas that crackle through these pages, and it gave me pause as I realized that the physics here is so close to reality that the face of God that appears in this book may soon be, in real life, before us all.” —Whitley Strieber, New York Times bestselling author of 2012: The War For Souls

“In Blasphemy, Preston rips the toga off God, and what remains is simply the answer to the most profound question of human existence...why are we here? A stunningly great read.” —W. Michael Gear and Kathleen O'Neal Gear, USA Today bestselling authors of People of the Nightland and the novels of North America's Forgotten Past

“Blasphemy is one hell of a good book. I couldn't stop reading, and at the end I had to force myself to slow down!” —David Hagberg, winner of three American Mystery Awards and USA Today bestselling author of Dance With the Dragon

“Preston has taken a fascinating concept and implemented it brilliantly. It's one of those books you think and talk about after you've finished it. I loved the characters. Even the sleazy ones were well-done. Science meets religion with a side order of politics. The mixture is explosive!” —Larry Bond, New York Times bestselling author of Dangerous Ground

“Can science discover God? Blasphemy is a stunningly ambitious novel that lives up to its goals. The theme is nothing less than the question: Is science the new religion?” —Barbara D'Amato, Edgar Award Winner and author of Death of a Thousand Cuts