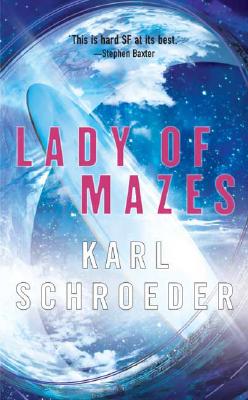 Karl Schroeder is one of the new stars of hard SF. His novels, Ventus and Permanence, have established him as a new force in the field. Now he extends his reach into Larry Niven territory, returning to the same distant future in which Ventus was set, but employing a broader canvas. Lady of Mazes is the story of Teven Coronal, a ringworld with a huge multiplicity of human civilizations. It's the story of what happens when the delicate balance of coexisting worlds is completely destroyed, when the fabric of reality itself is torn.

Brilliant but troubled Livia Kodaly is Teven's only hope against invaders both human and superhuman who threaten the fragile ecologies and human diversity. Filled with action, ideas, and intellectual energy, Lady of Mazes is the hard SF novel of the year.


Praise For Lady of Mazes…

Praise for Lady of Mazes:
"Karl Schroeder's new novel is the real thing--head-snappingly cool SF, with big and clever ideas, almost believable transcendence, and a way to map human scale stories into a world where 'post-human' powers exist." -Sfsite

"This is primarily a novel about ideas and about change. Luckily, readers have a bright and glimmering guide through the sometimes confusing maze in Livia. As she comes to a greater understanding of her universe, so does the reader. Highly recommended to fans of hard science fiction and to those readers who enjoy a good challenge." -Romantic Times Bookclub

"Schroeder's challenging hard SF novel explores the vast potential of artificial intelligence for transforming human culture. . . .The interrelationship between technology and philosophy . . . gives depth and breadth to a book that many will want to reread to get all the nuances."
--Publishers Weekly

"Schroeder specializes in far future, hard sf. His lively writing style and cutting-edge visions combine to deliver a topnotch story that emphasizes the human will to persevere even when reality is falling apart. A good choice for most sf collections." -Library Journal

"With Lady of Mazes, Schroeder gives us another novel of marvelous insight -- brightest glimpses of where our technology of communication and computation may be taking us."--Vernor Vinge

"A complete original. . . it's the most thought-provoking and interesting work of hard SF that I've read in the past year, and it deserves to be recognized as belonging to the cutting edge of the new far future in SF."--Charles Stross

"Lady of Mazes is Clarke's The City And The Stars re-imagined for a new century. This is hard SF at its best. . . Schroeder belongs to a dynasty that includes Benford, Vinge and Egan. Read this book and reboot your dreams -- and your nightmares."--Stephen Baxter

"Karl Schroeder has always had a knack for intelligent and provocative thought experiments, disguised as space opera. Now he ups the ante with a fascinating riff on consensual (and conflicting) realities. Lady of Mazes contains more cool ideas than Ventus and Permanence combined."--Peter Watts

"His lively writing style and cutting-edge visions combine to deliver a topnotch story."

"A brilliant performance, a novel of high ambition executed with the talent and imagination to match."

"This is hard SF at its best, hard SF extending the envelope of our imaginings to encompass utterly new terrains."


"It's the most thought-provoking and interesting work of hard SF that I've read in the past year."


"Highly recommended to fans of hard science fiction and to those readers who enjoy a good challenge."

"An astonishing saga. One helluva read!"