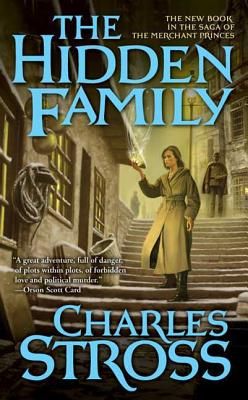 Miriam, a hip tech journalist from Boston, discovered her alternate world relatives in The Family Trade, and with them an elite identity she didn't know was hers. Now, in order to avoid a slippery slope down to an unmarked grave, Miriam, known as Lady Helge to the Family, starts applying modern business practices and scientific knowledge to a trade dominated by mercantilists -- with unexpected consequences for three different timelines, including the quasi-Victorian one exploited by the hidden family. Charles Stross is one of the big new SF writers of the 21st century, and the saga of The Merchant Princes is his most ambitious work yet.


Praise For The Hidden Family: Book Two of Merchant Princes…

“Charles Stross brings info-tech philosophy to the world of fantasy. . . .Stories unfold across three worlds that are brought to life with humor-laced action.” —The Denver Post

“It's an obvious homage to Zelazny's Amber series, but I like it a good deal more.” —The San Diego Union-Tribune

“The Hidden Family is a festival of ideas in action, fast moving and often very funny, but underpinned by a rigorous logical strategy. . . .Stross's breezy, almost Heinleinian mode of narration is on fine display in The Hidden Family.” —Locus

“Miriam Beckstein, aka Countess Helge Thorold-Hjorth of the Clan, finds her own world to conquer in this fast-moving sequel to The Family Trade. . . . Stross continues to mix high and low tech in amusing and surprising ways. . . .[he] weaves a tale worthy of Robert Ludlum or Dan Brown.” —Publishers Weekly

“English writer Charles Stross, whose books burst with pop-science ideas, intrigue, strong characters and even romance, continues his Merchant Princes series . . . . Stross is an energetic writer . . . who creates page-turning reads . . . . Readers will be relieved to learn that there is a lot to look forward to in The Hidden Family, including a finale that is all Gothic Romance: regrets, a ball and a happy reunion.” —Bookpage