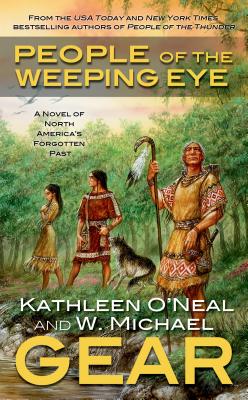 People of the Weeping Eye (Paperback)

Book One of the Moundville Duology (North America's Forgotten Past)

People called Old White the "Seeker," a man never long with any people or place. For years he had wandered, leaving a trail of war, wonder, and broken love in his wake. Now he is headed home, called back by visions of chaos, blood, and fire. But there is more to the Seeker than most know. He is a man driven by a secret so terrible it may topple the greatest city in North America.

When the far-off Katsinas told Old White it was time to go home, he had no idea that his journey would take him to the head of the Mississippi, where he would encounter the mystical Two Petals--a youngsoul woman obsessed with Spirit Power, who lives life backwards. But before Two Petals can find her way out of the future, Old White must heal the rift in her tortured soul. To do so, he will need the help of Trader, a loner consumed by his own dark past.

People of the Weeping Eye is an epic set against the might and majesty of the great Mississippian Chiefdoms. New York Times and USA Today bestselling authors W. Michael Gear and Kathleen O'Neal Gear have breathed new life into North America's Forgotten Past with a sweeping saga that will forever change your appreciation of our country.

W. Michael Gear, who holds a master's degree in archaeology, has worked as a professional archaeologist since 1978. He is currently principal investigator for Wind River Archaeological Consultants. With his wife, Kathleen O’Neal Gear, he has written the international and USA Today bestselling First North Americans Series and Anasazi Mystery Series.

Kathleen O'Neal Gear is a former state historian and archaeologist for Wyoming, Kansas, and Nebraska for the U.S. Department of the Interior. She has twice received the federal government's Special Achievement Award for "outstanding management" of our nation's cultural heritage. With her husband, W. Michael Gear, she is the co-author of many books, including the North America’s Forgotten Past series (People of the Longhouse, The Dawn Country, People of the Mist, People of the Wolf, among others); and the Anasazi Mysteries series. She and her husband live in Thermopolis, WY.

Praise For People of the Weeping Eye: Book One of the Moundville Duology (North America's Forgotten Past)…

“A timely saga of environmental catastrophe. . . . Drawing on their backgrounds in archaeology, the Gears vividly recreate Paleolithic America in this enchanting and instructive novel.” —Publishers Weekly on People of the Nightland
or
Not Currently Available for Direct Purchase
Copyright © 2020 American Booksellers Association