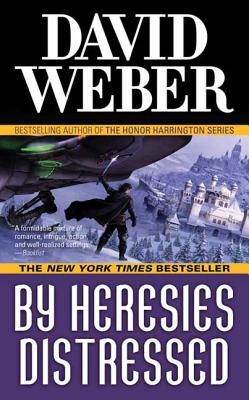 A Novel in the Safehold Series (#3)

In David Weber's By Heresies Distressed, the battle for the soul of the planet Safehold has begun.

The Kingdom of Charis and the Kingdom of Chisholm have joined together, pledged to stand against the tyranny of a corrupt Church. The youthful Queen Sharleyan of Chisholm has wed King Cayleb of Charis, forging a single dynasty, a single empire, dedicated to the defense of human freedom. Crowned Empress of that empire, Sharleyan has found in Cayleb's arms the love she never dared hope for in a "marriage of state." In Cayleb's cause, his defiance of the ruthless Group of Four who govern mother Church, she has found the task to which she can commit her mind and her courage. It is a cause for which she was born.

Yet there are things Sharleyan still does not know. Secrets Cayleb has not been permitted to share, even with her. Secrets like the true story of humanity on Safehold. Like the intricate web of lies, deception, and fabricated "religion" which have chained humanity for almost a thousand years. Like the existence of the genocidal alien Gbaba, waiting to complete mankind's destruction should humans ever attract their attention once more. Like the existence of a young woman, Nimue Alban, nine hundred years dead, whose heart, mind, and memories live on within the android body of the warrior-monk she knows as Merlin.

And so Empress Sharleyan faces the great challenge of her life unaware of all that task truly entails...or of how the secrets the man who loves her cannot share may threaten all they have achieved between them...and her own life.


Praise For By Heresies Distressed: A Novel in the Safehold Series (#3)…

â€œ* Gripping.... Shifting effortlessly between battles among warpspeed starships and among oar-powered galleys,Weber brings the political maneuvering, past and future technologies, and vigorous protagonists together for a cohesive, engrossing whole.â€ â€”PUBLISHERS WEEKLY, STARRED REVIEW ON OFF ARMAGEDDON REEF

â€œ* Along with its predecessor, this second installment of an important SF saga belongs in all libraries. Highly recommended.â€ â€”LIBRARY JOURNAL, STARRED REVIEW ON BY SCHISM RENT ASUNDER

David WeberÂ is a science fiction phenomenon. His popular Honor Harrington and Honorverse novelsâ€”including Mission of Honor, At All Costs, and Torch of Freedomâ€”are New York Times bestsellers and can't come out fast enough for his devoted readers. He is also the author of the Safehold series, including Off Armageddon Reef, By Schism Rent Asunder, By Heresies Distressed and A Mighty Fortress. His other top-selling science fiction novels include Out of the Dark, the Dahak books and the Multiverse books, written with Linda Evans. He has also created an epic SF adventure series in collaboration with John Ringo, including We Few. His novels have regularly been Main Selections of the Science Fiction Book Club. Weber has a bachelorâ€™s degree from Warren Wilson College, and attended graduate school in history at Appalachian State University. He lives in South Carolina.
Loading...
or
Not Currently Available for Direct Purchase