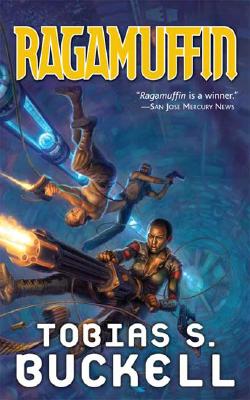 The Benevolent Satrapy rule an empire of forty-eight worlds, linked by thousands of wormholes strung throughout the galaxy. Human beings, while technically "free," mostly skulk around the fringes of the Satrapy, struggling to get by. The secretive alien Satraps tightly restrict the technological development of the species under their control. Entire worlds have been placed under interdiction, cut off from the rest of the universe. Descended from the islanders of lost Earth, the Ragamuffins are pirates and smugglers, plying the lonely spaceways around a dead wormhole. For years, the Satraps have tolerated the Raga, but no longer. Now they have embarked on a campaign of extermination, determined to wipe out the unruly humans once and for all. But one runaway woman may complicate their plans. Combat enabled, Nashara is more machine than flesh, and she carries inside her a doomsday weapon that could reduce the entire galaxy to chaos. A hunted fugitive, she just wants to get home before she's forced to destroy civilization---and herself.

“All in all, Ragamuffin is a winner.”—San Jose Mercury News


“Buckell represents an important force behind the genre’s change. Buckell’s work deals with complex racial issues in a way worthy of the self-proclaimed ‘literature of ideas’: head-on, with no visible flinching, while still managing to give its readers a rollicking good time.”—The Seattle Times on Ragamuffin


“Ragamuffin establishes the author as a signature voice of Afro-Caribbean speculative fiction.”—Library Journal


“Buckell plays with Caribbean and Aztec cultures, bending their exotic flavor to technology-flavored ends. . . . A lot of fun.”—Publishers Weekly on Ragamuffin

“Full of wild-eyed action, feats of bravery, exotic beings, and odd ways of thought, startling uses of technology, and bold manifestos on freedom. I expect this is not the last we’ll be seeing of these ‘duppy conquerors.’”—Sci Fi Weekly (Grade A) on Ragamuffin

Tobias S. Buckell is a Caribbean-born speculative fiction writer who grew up in Grenada, the United States, and the British Virgin Islands. He now lives (through many strange twists of fate) in a small college town in Ohio with his wife, Emily.

Buckell was a first-place winner for the Writers of the Future and has been nominated for the John W. Campbell Award for Best New Writer. He is also a graduate of the Clarion Science Fiction Writing Workshop.
Loading...
or
Not Currently Available for Direct Purchase