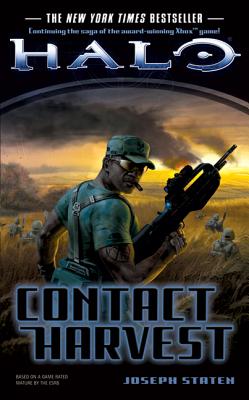 Based on the universe and characters from the multimillion selling Xbox video games Halo and Halo 2, Halo: Contact Harvest continues the story of humanity's next great battle in their ongoing wars against the seemingly infinite alien factions who consider the human race heathens.

It is the year 2524. Harvest is a peaceful, prosperous farming colony on the very edge of human-controlled space. But we have trespassed on holy ground--strayed into the path of an aggressive alien empire known as the Covenant. What begins as a chance encounter between an alien privateer and a human freighter catapults mankind into a struggle for its very existence.

But humanity is also locked in a bitter civil war known as the Insurrection. So the survival of Harvest's citizens falls to a squad of battle-weary UNSC Marines and their inexperienced colonial militia trainees. In this unlikely group of heroes, one stands above the rest...a young Marine staff sergeant named Avery Johnson.

Joseph Staten started with Bungie Studios in 1998, and has since served as a writer and designer for Oni (2001) as well as writer and cinematics director for Halo (2001) and Halo 2 (2004). Joseph is also working with Peter Jackson's newly formed game development studio, Wingnut Interactive, writing and designing in the Halo universe.