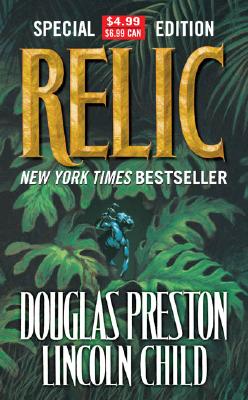 The book that started the New York Times bestselling collaboration of Douglas Preston and Lincoln Child.
Just days before a massive exhibition opens at the popular New York Museum of Natural History, visitors are being savagely murdered in the museum's dark hallways and secret rooms. Autopsies indicate that the killer cannot be human...
But the museum's directors plan to go ahead with a big bash to celebrate the new exhibition, in spite of the murders.
Museum researcher Margo Green must find out who-or what-is doing the killing. But can she do it in time to stop the massacre?
Special lower priced edition available for a limited time.

"What might happen if a creature from Jurassic Park came to New York City." -The Chicago Tribune on Relic

"Wildly cool...Thrill hounds couldn't ask for a creepier environment...a thriller staged in the world's scariest building, with no room for the squeamish." -Kirkus Reviews on Relic

"Jaws takes Manhattan."--San Francisco Examiner and Chronicle on Relic
"A thriller that arrives with the kinetic energy of a meteor smacking the earth. "--Tampa Tribune and Times on Relic

"A high-concept, high-energy thriller . . . Builds to a superbly exciting climax, and then offers a final twist to boot."--Publishers Weekly on Relic

DOUGLAS PRESTON has worked for the American Museum of Natural History as well as being a contributor to "The New Yorker." He is the "New York Times" bestselling author of "The Codex" and "Tyrannosaur Canyon.""Relic" is the first book in his many "New York Times" bestselling collaborations with Lincoln Child, including "Dance of Death, ""Brimstone, The Cabinet of Curiosities, " and "Still Life with Crows." He lives with his family in Maine.