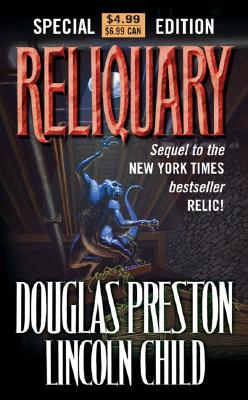 Hidden deep beneath Manhattan lies a warren of tunnels, sewers, and galleries, mostly forgotten by those who walk the streets above. There lies the ultimate secret of the Museum Beast. When two grotesquely deformed skeletons are found deep in the mud off the Manhattan shoreline, museum curator Margo Green is called in to aid the investigation. Margo must once again team up with police lieutenant D'Agosta and FBI agent Pendergast, as well as the brilliant Dr. Frock, to try and solve the puzzle. The trail soon leads deep underground, where they will face the awakening of a slumbering nightmare.
Special lower priced edition available for a limited time.

"Preston and Child carry off this sequel with great energy and panache. In particular, their portrait of the underground dwellers lifts this thriller into a category all its own." --Chicago Tribune on Reliquary

"Reads like a summer roller-coaster flick." --Philadelphia Inquirer on Reliquary

"The sequel to the popular Relic hits all the right buttons for those looking for thrills and chills from things that go bump in the night.... Another page-turner that cries out for translation to the silver screen." --The Orlando Sentinel on Reliquary

DOUGLAS PRESTON has worked for the American Museum of Natural History as well as being a contributor to "The New Yorker." He is the "New York Times" bestselling author of "The Codex" and "Tyrannosaur Canyon.""Relic" was the first book in his many "New York Times" bestselling collaborations with Lincoln Child, including "Dance of Death, ""Brimstone, The Cabinet of Curiosities, " and "Still Life with Crows." He lives with his family in Maine.