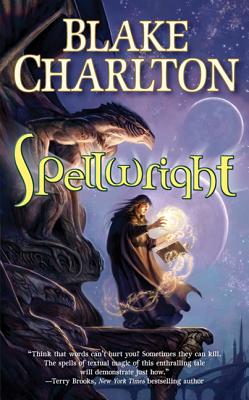 Yet he has always felt that he is destined to be something more than a failed wizard. When a powerful, ancient evil begins a campaign of murder and disruption, Nicodemus starts to have disturbing dreams that lead him to believe that his misspelling could be the result of an curse. But before he can discover the truth about himself, he is attacked by an evil which has already claimed the lives of fellow wizards and has cast suspicion on his mentor. He must flee for his own life if he's to find the true villain.

“I'm fascinated to see what happens next, and will be following every word with the absorption of an apprentice spellwright. You will be, too.” —Tad Williams, bestselling author of Shadowmarch

“Think words can't hurt you? Sometimes, they can kill. The spells of textual magic of this enthralling take will demonstrate how.” —Terry Brooks, New York Times bestselling author

“A refreshingly new look at magic and the power of words. Nicodemus is a strong protagonist, but the supporting cast is equally as memorable. This series opener [will] resonate in the reader's mind. Highly recommended.” —Library Journal, starred review

“Spellwright brims with a love for the genre and a thrill for written language.” —Chicago Sun-Times