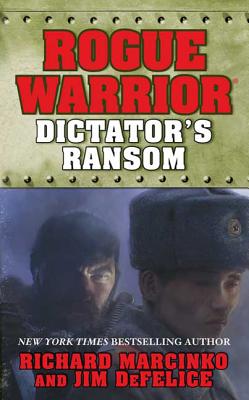 Is Kim Jong-il really a fanatical fan of Dick Marcinko, the Rogue Warrior? Has the terrifying tyrant actually read every one of Marcinko's many New York Times bestsellers?

One thing is certain: the Rogue Warrior wants nothing to do with the brutal despot. When, in Dictator's Ransom, "the loathsome dwarf"--as George W. Bush derided him--invites Marcinko to the Hermit Kingdom, the Rogue Warrior instantly declines...prompting the CIA to RSVP on his behalf. Of course, the Agency is sending Marcinko on this life-threatening mission, not to sign books but as part of a clandestine special op: Marcinko is to track down four covert nuclear warheads secreted in the Supreme Leader's palace.

More than just another thriller, however, Dictator's Ransom is a novel of electrifying energy and wicked wit. Marcinko rightfully takes his place alongside Huck Finn as the raunchy, rambunctious American hero he truly is. Kim Jong-il quickly becomes the most outrageous, most frightening, most demented nuclear psychopath in all of history and literature. Dictator's Ransom will have you shuddering with fear and trembling...even as it has you cracking up with laughter.

RICHARD MARCINKO is a living, breathing hero honored with the silver star and four bronze stars for valor, along with two Navy Commendation medals and other honors. After serving in Vietnam, he went on to start and command SEAL Team 6, the Navy's anti-terrorist group, and Red Cell, a high-level anti-terrorist unit. Marcinko keeps his hand in the field as the president of a private international security company and now lives in Warrington, Virginia.

Best known for American Sniper, Jim DeFelice is the author of more than a dozen New York Times best-sellers and a host of other books, many of them celebrating the lives of unsung American heroes.
or
Not Currently Available for Direct Purchase
Copyright © 2020 American Booksellers Association