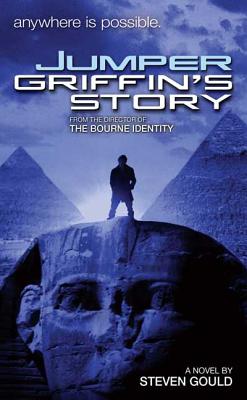 An original novel from Steven Gould, creator of the Jumper series, that tells the back story of Griffin O'Connor, a character created for the film of Jumper.

What if you could jump? Go anywhere in the world in the blink of an eye? What would you do? Where would you go? What if you were only five years old?

Griffin has a secret. It's a secret that he's sworn to his parents to keep, and never tell. Griffin is a Jumper: a person who can teleport to any place he has ever been. The first time was when he was five, and his parents crossed an ocean to protect the secret. The most important time was when he was nine. That was the day that the men came to his house and murdered his parents. Griffin knows that the men were looking for him, and he must never let them find him.

Griffin grows up with only two goals: to survive, and to kill the people who want him dead. And a Jumper bent on revenge is not going to let anything stand in his way.

“The theme of Steven Gould's Jumper is, quite literally, escape. The first half of Jumper has a charm and bounce that carry the reader past the implausibilities inherent in the premise--imagine a Holden Caulfield with the power of life or death over the jerks and phonies.” —The New York Times Book Review

“Gould proves once again that in the hands of a wonderful, perceptive writer, there is no such thing as an old idea. What sets Jumper apart from other novels that dip back into the well of the masters is that Gould brings his own keen empathy and rigorous intelligence to the story.....This is a book that you won't want to miss. It reminded me of why I first came to love science fiction, and yet I didn't have to be twelve again to have a great time reading it.” —Orson Scott Card

STEVEN GOULD is the author of the beloved classic Jumper, basis for the 2008 film of the same name, as well as Wildside, Helm, Blind Waves, Reflex, and Jumper: Griffin’s Story. He is the recipient of the Hal Clement Young Adult Award for Science Fiction and has been nominated for both the Hugo and the Nebula awards. Gould lives in New Mexico with his wife, writer Laura J. Mixon.
Loading...
or
Not Currently Available for Direct Purchase