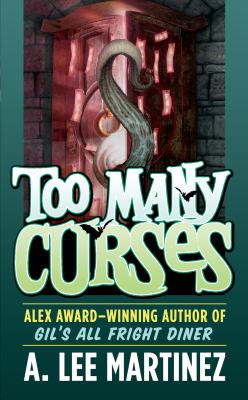 Too Many Curses (Paperback)

From A. Lee Martinez, the Alex Award-winning author of Gil's All Fright Diner, comes Too Many Curses.


Margle the Horrendous takes special pride in never killing his enemies. Instead, the wizard transforms them into various accursed forms and locks them away in his castle. His halls are filled with his collection of fallen heroes and defeated villains.

It's Nessy's duty to tend this castle. It's a lot of work, but she takes pride in housekeeping talents that keep the castle from collapsing into chaos. But when Margle suddenly dies, everything begins to unravel. Nessy finds herself surrounded by monsters, curses, a door that should never be opened, and one very deadly dark wizardess.

Nessy doesn't have might or magic on her side; she's just a kobold: short, furry, and sensible. It would be smarter to walk away, but taking care of the castle is Nessy's job, and that's just what she intends to do.

If only she could find time to polish the silver while beating back the forces of darkness.

"Fans of Douglas Adams will happily sink their teeth into this combo platter of raunchy laughs and ectoplasmic ecstasy." —Publishers Weekly, starred review on Gil's All Fright Diner

A. Lee Martinez is the acclaimed author of several science fiction and fantasy novel including Gil's All Fright Diner, which won the Alex Award, In the Company of Ogres, A Nameless Witch, The Automatic Detective, and Too Many Curses, among others. Martinez lives in Texas.

Praise For Too Many Curses…

“Nessy has hidden strength, a powerful attachment to home, and a healthy dose of common sense. Aided by allies--a bodiless voice, a fruit bat, and a wizard in a jar--she attains pretty impressive heights in Martinez's newest laugh-out-loud variations on fantasy tropes.” —Booklist on Too Many Curses

“A smart, rocket-fast read with a clever, twisty plot that comes to a satisfying conclusion.” —Publishers Weekly, starred review on The Automatic Detective

“In the Company of Ogres tweaks fantasy clichés most excellently.” —Booklist