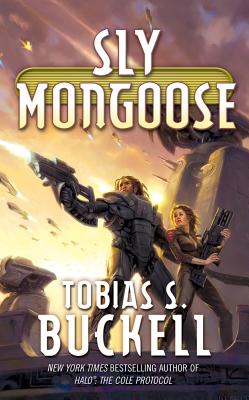 Welcome to Chilo, a planet blasted by corrosive rain, crushing pressure, and deadly heat. A planet where people live in floating cities high above the inferno. A select group of young men, including fourteen-year-old Timas, risk death to obtain the raw materials necessary for survival by travelling down through the acid clouds to mine the planet’s surface.

Timas’s life is turned upside down when a man named Pepper crash-lands on the city. Pepper is fleeing a bizarre alien intelligence, and he bears ominous news that a full-scale invasion cannot be far behind.

As Timas and Pepper try to convince the reluctant city government to prepare for war, floating cities all across Chilo fall silent one by one. Time is running out for Timas and Pepper to discover how to defeat an enemy that turns Chilo’s own citizens into monsters, and to discover the secret hidden beneath Chilo’s deadly clouds—a secret that could save the planet, and may prevent interplanetary war.

“Buckell delivers double helpings of action and violence in a plot-driven story worthy of a Hollywood blockbuster.”  —Publishers Weekly on Sly Mongoose


“Tobias Buckell is stretching the horizons of science fiction and giving readers a hell of a lot of swashbuckling fun in the bargain.”
—John Scalzi, bestselling author of Fuzzy Nation on Sly Mongoose

“Crystal Rain is refreshing and imaginative, an exotic stew of cultures, myths, and technology.”  —Kevin J. Anderson, bestselling coauthor of The Dune novels

Tobias S. Buckell is a Caribbean-born writer who grew up in Grenada, the United States, and the British Virgin Islands. He now lives in Bluffton, Ohio.
Loading...
or
Not Currently Available for Direct Purchase