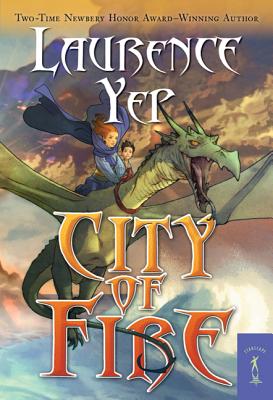 “Award-winning author Laurence Yep delivers another fantastic fantasy tale, this time set in an alternate 1941 San Francisco, but with connections to contemporary events. This story involves the Kushan people, and, today, in San Francisco Kushan artifacts are being exhibited at the Asian Art Museum. Coincidence? If San Franciscans report seeing shape-shifting dragons and flying carpets in the sky, this 'fantasy' may be reclassified as 'realistic fiction.' In either case, young and old are going to love the delightful and brave characters that Yep has created.”
— Karen Briggs, Great Northern Books and Hobbies, Oscoda, MI
View the List

This thrilling tale takes readers on an unforgettable journey through an alternate version of our world in 1941 -- a world filled with magical beings such as dragons in human form, tiny "lap griffins," reincarnations of legendary Chinese warriors, Japanese folk creatures, and goddesses in disguise.

When her older sister dies trying to prevent the theft of one of her people's great treasures, twelve-year-old Scirye sets out to avenge her and recover the precious item. Helping her are Bayang, a dragon disguised as a Pinkerton agent; Leech, a boy with powers he has not yet discovered; and Leech's loyal companion Koko, who has a secret of his own. All have a grudge against the thieves who stole the treasure: the evil dragon Badik and the mysterious Mr. Roland.

Scirye and her companions pursue the thieves to Houlani, a new Hawaiian island being created by magic. There, they befriend Pele, the volatile and mercurial goddess of volcanoes. But even with Pele on their side, they may not be able to stop Mr. Roland from gaining what he seeks: the Five Lost Treasures of Emperor Yu. Together, the treasures will give him the power to alter the very fabric of the universe.

LAURENCE YEP is the critically acclaimed author of more than sixty books for children and young adults, including two Newbery Honor Award winners: Dragonwings and Dragon’s Gate. In 2005, he was awarded the Laura Ingalls Wilder Award for a substantial and lasting contribution literature for children. Yep lives with his wife, author and editor Joanne Ryder, in California.
Loading...
or
Not Currently Available for Direct Purchase