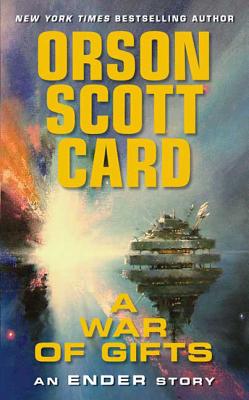 An Ender Story (Other Tales from the Ender Universe)

Orson Scott Card offers a Christmas gift to his millions of fans with A War of Gifts, a short novel set during Ender's first years at the Battle School where it is forbidden to celebrate religious holidays.
The children come from many nations, many religions; while they are being trained for war, religious conflict between them is not on the curriculum. But Dink Meeker, one of the older students, doesn't see it that way. He thinks that giving gifts isn't exactly a religious observation, and on Sinterklaas Day he tucks a present into another student's shoe.


Praise For A War of Gifts: An Ender Story (Other Tales from the Ender Universe)…

“Card has taken the venerable SF concepts of a superman and an interstellar war against aliens, and, with superb characterization, pacing, and language, combined them into a seamless story of compelling power.” —Booklist on Ender's Game