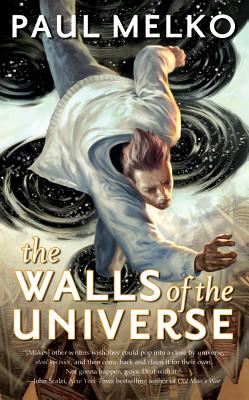 The Walls of the Universe

John Rayburn thought all of his problems were the mundane ones of an Ohio farm boy in his last year in high school. Then his doppelgänger appeared, tempted him with a device that let him travel across worlds, and stole his life from him. John soon finds himself caroming through universes, and, when the device breaks, unable to return home. John settles in a new universe to unravel the machine’s secrets and fix it.

Meanwhile, his doppelgänger tries to exploit the commercial technology he’s stolen from other Earths: the Rubik’s Cube! John’s attempts to lie low in his new universe backfire when he inadvertently introduces pinball. It becomes a huge success. Both actions draw the notice of other, more dangerous travelers, who are exploiting worlds for ominous purposes. Fast-paced and exciting, this is SF adventure at its best from a rising star.


Praise For The Walls of the Universe…

“Make[s] other writers wish they could pop into a close by universe, steal his book, and then come back and claim it for their own.”
—John Scalzi
“A distinctive vision of a post-singularity future…. Melko gives us an absorbing tour of a world where humanity isn’t what it used to be.”
—Charles Stross on Singularity's Ring


“Bursts forth like a new universe exploding into being; a major book that happens to also be the debut novel of a stellar new talent.”
—Robert J. Sawyer, Hugo Award–winning author of Rollback on Singularity's Ring

“Melko is clearly an up-and-comer, and this is a distinctive debut.”
—Kirkus Reviews on Singularity's Ring

PAUL MELKO lives in Ohio.
Loading...
or
Not Currently Available for Direct Purchase