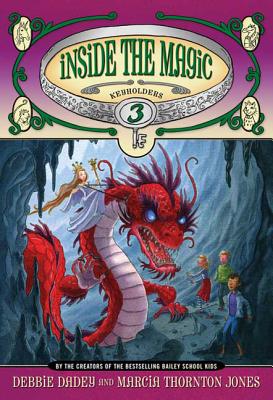 Inside the Magic is the third in a series of light fantasy chapter books set in Morgantown, a town on the border between the real world and the magical world, by the authors of the Publishers Weekly best selling BAILEY SCHOOL KIDS—a series of 50 books with more than 30 million copies sold!

Oh, no! Mr. Leery has been kidnapped by the evil Queen of the Boggarts. It's up to the apprentice Keyholders Penny, Luke, and Natalie to rescue him. Together with their links, a unicorn named Kirin, a dragon named Dracula, and a rat named Buttercup, the three Keyholders cross the border to the land inside the magic—a place where anything can happen. Will they find Mr. Leery in time?

“Kids will be drawn to the likable, believable protagonists and the promise of more enticing magic and action to follow.” —Publishers Weekly on Keyholders #1: This Side of Magic

“Magical attacks, lively characters from both sides of the hedge and slapstick set pieces...The bright humor will attract and keep young pre-Potterites.” —Kirkus Reviews on Keyholders #1: This Side of Magic

DEBBIE DADEY taught first grade before becoming a librarian.  It was while teaching that she first realized how much she wanted to write a book for reluctant readers.  Her first book, co-authored with fellow teacher Marcia Thornton Jones, was the result of a very bad day. Since then, Debbie and Marcia have collaborated on more than 125 books with sales of over forty million copies. Their books include the Keyholders series, beginning with This Side of Magic and The Other Side of Magic.  Debbie lives in Bucks County, Pennsylvania with her husband, three dogs, and three children.

MARCIA THORNTON JONES enjoys reading more than anything else. As a teacher, her favorite part of the school day was sharing books with her students. It was that love of reading that drew her to writing. She wanted to write the same kinds of stories that she and her students enjoyed reading. One afternoon she mentioned to the school librarian that she’d always had an interest in writing. The librarian, Debbie Dadey, shared a common desire to write stories that would encourage reading skills while promoting a true joy of reading. The next afternoon, Marcia and Debbie met while their students were at lunch and began writing. That story, Vampires Don’t Wear Polka Dots, became the first book in their bestselling series, The Adventures of the Bailey School Kids.
Marcia lives in Lexington, Kentucky with her husband, Stephen, and their two cats.