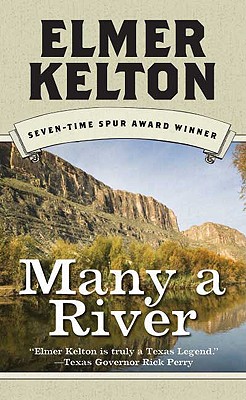 Many a River (Mass Market Paperback)

The Barfield family, Arkansas sharecroppers, are heading west with their sons Jeffrey and Todd. In far West Texas their camp is attacked by Comanche raiders and the elder Barfields are killed and scalped. The younger boy, Todd, is taken captive by the Indians. The older son, Jeffrey, manages to hide and is rescued by the militia men.  Jeffrey is taken in by a home-steading family, while Todd is sold, for a rifle and gunpowder, to a Comanchero trader named January.

Both become caught up in the turbulence of the Civil War, which even in remote West Texas, the border country with New Mexico, pits Confederate sympathizers against Unionists. The brothers, separated by violence, are destined to be rejoined by violence.  Will they meet as friends or deadly enemies?

Elmer Kelton (1926-2009) was the award-winning author of more than forty novels, including "The Time It Never Rained," "Other Men's Horses," "Texas Standoff" and "Hard Trail to Follow." He grew up on a ranch near Crane, Texas, and earned a journalism degree from the University of Texas. His first novel, "Hot Iron," was published in 1956. Among his awards have been seven Spurs from Western Writers of America and four Western Heritage awards from the National Cowboy Hall of Fame. His novel "The Good Old Boys" was made into a television film starring Tommy Lee Jones. In addition to his novels, Kelton worked as an agricultural journalist for 42 years, and served in the infantry in World War II. He died in 2009.

Praise For Many a River…

"Kelton’s writing is absolutely authentic, and he is a master at spinning that wildly expressive species of dusty idiom that makes good western writing so gratifying.  Add to that some stern, if flexible morality and tight plotting full of tense, finger-twitching action, and you have some outstanding western fare."  --Booklist on Texas Showdown

"The author, a seven-time Spur Award winner, has created a story rich in historical context, character development and action."  --Tulsa World on Sons of Texas