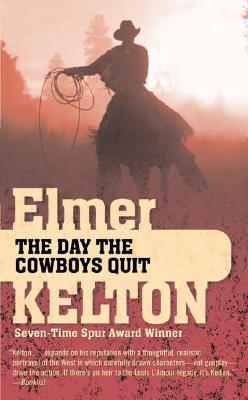 ""The Day the Cowboys Quit "was inspired by an historic event, a strike against large ranches on the Texas high plains, when the encroachment of an Eastern corporate mentality drove freedom-loving cowboys to drastic measures no matter the cost." --Elmer Kelton

Wagon boss Hugh Hitchcock knows the cowboy life better than most: In 1883 if you're a cowboy, you can't own a cow and you are stigmatized as a drunk. Worse, you are exploited by the wealthy cattle owners who fence the range, replace traditions and trust with written rules of employment, refuse to pay a livable wage, and change things "that ought to be left alone." The cowboys working in the Canadian River country of the Texas Panhandle decide to fight back, to do the unthinkable: go on strike.

In this celebrated novel, Elmer Kelton uses the true but little-known Canadian River incident to focus on the changes brought to ranching by big-money syndicates.

Elmer Kelton (1926-2009) was the award-winning author of more than forty novels, including "The Time It Never Rained," "Other Men's Horses," "Texas Standoff" and "Hard Trail to Follow." He grew up on a ranch near Crane, Texas, and earned a journalism degree from the University of Texas. His first novel, "Hot Iron," was published in 1956. Among his awards have been seven Spurs from Western Writers of America and four Western Heritage awards from the National Cowboy Hall of Fame. His novel "The Good Old Boys" was made into a television film starring Tommy Lee Jones. In addition to his novels, Kelton worked as an agricultural journalist for 42 years, and served in the infantry in World War II. He died in 2009.

Praise For The Day the Cowboys Quit…