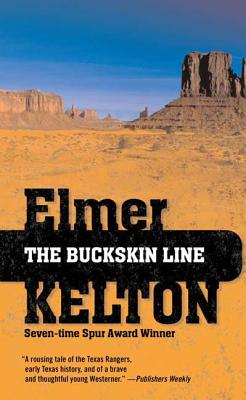 ""The Buckskin Line "tells of Texas' chaotic early years, when a ragtag group of irregular volunteers fought to defend the far edges of settlement from incursion by Indians and frontier outlaws. In time, they would become known as the Texas Rangers." Elmer Kelton

An intense, red-haired young man named Rusty Shannon rides into Fort Belknap on the Brazos River and joins the Texas Rangers. Years before, Mike Shannon rescued Rusty from a Comanche war party and became his adoptive father. Not long ago, Mike Shannon, was bushwhacked and killed, and his death still haunts Rusty. Rusty thinks he knows the identity of Mike's killers. But with Texas now in the throes of seceding from the Union, Rusty has his hands full fighting for the law in lawless Texas and for the life of the woman he loves. If that were not enough of a burden, Rusty is also heading for a showdown with the Comanche warrior who killed his family over twenty years ago.

Elmer Kelton (1926-2009) was the award-winning author of more than forty novels, including The Time It Never Rained, Other Men's Horses, Texas Standoff and Hard Trail to Follow. He grew up on a ranch near Crane, Texas, and earned a journalism degree from the University of Texas. His first novel, Hot Iron, was published in 1956. Among his awards have been seven Spurs from Western Writers of America and four Western Heritage awards from the National Cowboy Hall of Fame. His novel The Good Old Boys was made into a television film starring Tommy Lee Jones. In addition to his novels, Kelton worked as an agricultural journalist for 42 years, and served in the infantry in World War II. He died in 2009.

Praise For The Buckskin Line…

“Elmer Kelton is to Texas what Mark Twain was to the Mississippi River.”—Jory Sherman, author of The Barons of Texas