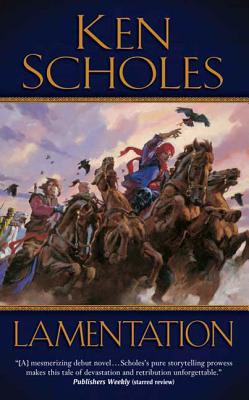 Lamentation (The Psalms of Isaak #1)

This remarkable first novel from award-winning short fiction writer Ken Scholes will take readers away to a new world—an Earth so far in the distant future that our time is not even a memory; a world where magick is commonplace and great areas of the planet are impassable wastes. But human nature hasn't changed through the ages: War and faith and love still move princes and nations.

In Lamentation, the first entry in the Psalm of Isaak series, an ancient weapon has completely destroyed the city of Windwir. From many miles away, Rudolfo, Lord of the Nine Forest Houses, sees the horrifying column of smoke rising. He knows that war is coming to the Named Lands.

Nearer to the Devastation, a young apprentice is the only survivor of the city—he sat waiting for his father outside the walls, and was transformed as he watched everyone he knew die in an instant.


Praise For Lamentation (The Psalms of Isaak #1)…

“This is the golden age of fantasy, with a dozen masters doing their best work. Then along comes Ken Scholes, with his amazing clarity, power, and invention, and shows us all how it's done. No more ponderous plotting - Scholes barely gives us time to breathe. Yet he creates vivid characters, a world thick with detail, and wonders we've never seen before. I wish my first novel had been this good. I wish all five volumes of this series were already published so I could read them now.” —Orson Scott Card

“Ken Scholes is a hot new voice to watch for on the interesting frontier between science fiction and fantasy. He has a keen eye for action and a keen ear for the sounds of the human heart. Grab on now, because he's going places.” —Harry Turtledove

“As intricate as a Whymer maze, Ken Scholes' Lamentation will keep the reader up until the wee hours, winding through this splendid labyrinth. Bravo!” —Dennis L. McKiernan, bestselling author of the Mithgar series

“Ken Scholes's Lamentation is an iconic SF story cloaked in fantasy, drawing raw material from classics such as A Canticle for Liebowitz and Earth Abides, but forging something new, with colorful characters, compelling scenes, and unfolding miracles.” —Kevin J. Anderson, bestselling co-author of Sandworms of Dune

“Ken Scholes' Lamentation is a whale of a first novel, set in a world where technological magic has come and gone, and come again, where organized religion has attempted to recover and restore lost knowledge, if with a certain amount of censorship, where no one is quite what they seem, and where parental ambitions for offspring are filled with deep love and sacrifices, along with double double-crosses, conflicting motives, and tragedy.” —L.E. Modesitt, Jr.

“The tone of [Lamentation] is precise and just about exactly right: I was engaged from the opening page, stayed up late looking to finish it, and then begged Scholes to let me see the next book as soon as possible…. I'd describe it as intelligent epic fantasy done right and written with all of the flab removed. It's nothing like George Martin's first Song of Ice and Fire novel, except that like that book, it has the chance of standing as an important book in the evolution of the epic fantasy form, is a delight, and is a book that readers are very likely to take to heart. It's one of the best first fantasies I've read in some time.” —Jonathan Strahan

Ken Scholes is the award-winning, critically-acclaimed author of multiple novels and short stories. His work has appeared in print since 2000 and includes the Psalms of Isaak series (Lamentation, Canticle, Antiphon) and the Tor.com short story "If Dragon's Mass Eve Be Cold and Clear."

Ken's eclectic background includes time spent as a label gun repairman, a sailor who never sailed, a soldier who commanded a desk, a fundamentalist preacher (he got better), a nonprofit executive, a musician and a government procurement analyst. He has a degree in History from Western Washington University.

Ken is a native of the Pacific Northwest and makes his home in Hillsboro, Oregon, where he lives with his twin daughters.