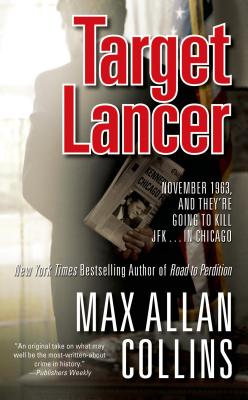 “Target Lancer is a fresh treatment of the runup to the most significant single event of the twentieth century, and Nate Heller is the perfect protagonist to lead us through it. Max Allan Collins has hit a home run.” —Mike Dennis

“Target Lancer may well reinvigorate the conspiracy theory arguments around the assassination of JFK. It's another winner for Max Allan Collins and his Nathan Heller series and an important historical novel about the Kennedy era.” —Mystery Maven Blog

“No one can twist you through a maze with the intensity and suspense of Max Allan Collins.” —Clive Cussler, author of Raise the Titanic, on Bye Bye, Baby

“A whirlwind tour of the story surrounding Marilyn Monroe's untimely demise as it might have been covered in the garish pages of Confidential magazine, or by TMZ for that matter, with more grit than George Baxt's Hollywood mysteries.” —Library Journal on Bye Bye, Baby

MAX ALLAN COLLINS was the Mystery Writers of America (MWA)'s 2017 Grand Master. He is the bestselling author of the graphic novel Road to Perdition, the basis for the hit film starring Tom Hanks. He has won two Shamus Awards, for True Detective and Stolen Away, both from his series of Nathan Heller novels. A prolific writer, Collins' other works include mystery novels, screenplays, comic books, film novelizations, and historical fiction.
Loading...
or
Not Currently Available for Direct Purchase