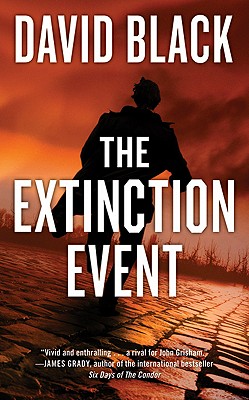 After Jack Slidell’s discovery of his law partner’s death in an apparent drug/sex killing, he and the beautiful Caroline Wonder are suddenly hurled into a race for their lives, a hair-raising odyssey filled with outrageous characters and violent suspense.  Hit men and sinister government agencies hunt them at every turn, but their quest for justice determines more than the guilt or innocence of a dead friend: the fate of the earth and humanity’s survival hang in the balance.

A page-burning, pulse-pounding chase-thriller of earth-shattering dimensions, The Extinction Event is also populated with colorful characters almost Dickensian in their energy and flamboyance. This is a book that will stick with you when you are done, a story you will remember for a long, long time.


Praise For The Extinction Event…

“In a room full of tired thrillers and gumshoe capers, David Black’s sensational new book is the life of the party. The Extinction Event sits at the table of Bradbury and Chinatown, Stieg Larsson and CSI.”--Graydon Carter, journalist, author and editor of Vanity Fair

“Black is a serious writer in the old sense, in the absolute sense. Brilliant, unsettling and honest, this is David's best book."
--Alec Baldwin, Golden Globe and Emmy Award - Winning actor and star of 30 Rock


“There are always surprises within David's work, more so because he writes of the familiar and makes the familiar surprising.  There are amazing surprises in this one."
--Richard Dreyfuss, Academy Award, Golden Globe, and Screen Actors Guild Award - Winning actor