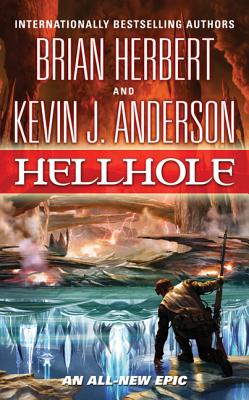 Only the most desperate colonists dare to make a new home on Hellhole. Reeling from a recent asteroid impact, tortured with horrific storms, tornadoes, hurricanes, earthquakes, and churning volcanic eruptions, the planet is a dumping ground for undesirables, misfits, and charlatans…but also a haven for dreamers and independent pioneers.

Against all odds, an exiled general named Adolphus has turned Hellhole into a place of real opportunity for the desperate colonists who dare to make the planet their home. While the colonists are hard at work developing the planet, General Adolphus secretly builds alliances with the leaders of the other Deep Zone worlds, forming a clandestine alliance against the tyrannical, fossilized government responsible for their exile.


Praise For Hellhole (The Hellhole Trilogy #1)…

“Hellhole is a militaristic SF story of galactic proportions. . . .  A brilliant strategist, lover of Old Earth history, and cast-off of a now-defunct noble line, Adolphus is a Robin Hood for the galaxy to unite behind and support. The characters are easy for the reader to believe in, brought to life through not only their own emotions but also the responses and thoughts of the individuals around them.” —Booklist (starred review)

“Combines the best of space opera with galactic intrigue and a cast of memorable characters. Fans of David Weber's "Honor Harrington" series and the Star Wars® novels should enjoy a new entry into this popular category.” —Library Journal on Hellhole

“Unquestionably, Herbert & Anderson can spin a great yarn while producing a vivid, mystifying universe, filled with characters that are both endearing, and loathsome.” —BookSpotCentral on The Winds of Dune