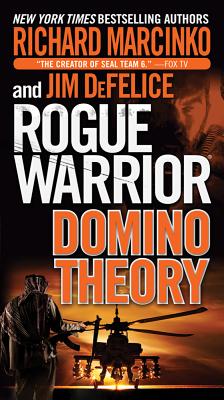 When the Rogue Warrior travels to India to help supervise security arrangements for the upcoming Commonwealth Games, he and his team find themselves up to their skivvies in terrorists of all types—Pakistanis. But it's not just the Games that are being targeted for disruption—Demo Dick and his young bucks uncover a plot to steal all seventy nuclear warheads the Indians have amassed for war against the Pakistanis.

The Rogue Warrior must overcome various obstacles to prevent disaster: a high-tech remote controlled attack helicopter that makes the Apache look like a child's toy, an ominous chemical factory about to go boom, and tea and crumpets with the Queen.

We're just kidding about the Queen.

Marcinko and DeFelice sprinkle the action with trademark Rogue Warrior humor and non-PC asides in the latest installment of the bestselling series. As usual, the plot mixes fact with fiction, and incorporates some of the original SEAL Team 6 skipper's recent experiences in India.

“Marcinko is the real McCoy, a warrior who has lived it.” —Stephen Coonts, New York Times bestselling author of The Assassin

“The most colorful, hell-raising, bomb-throwing ex-SEAL commander of them all.” —Playboy

RICHARD MARCINKO is a living, breathing hero honored with the silver star and four bronze stars for valor, along with two Navy Commendation medals and other honors. After serving in Vietnam, he went on to start and command SEAL Team 6, the Navy's anti-terrorist group, and Red Cell, a high-level anti-terrorist unit. Marcinko keeps his hand in the field as the president of a private international security company and now lives in Warrington, Virginia.

Best known for American Sniper, Jim DeFelice is the author of more than a dozen New York Times best-sellers and a host of other books, many of them celebrating the lives of unsung American heroes.
Loading...
or
Not Currently Available for Direct Purchase