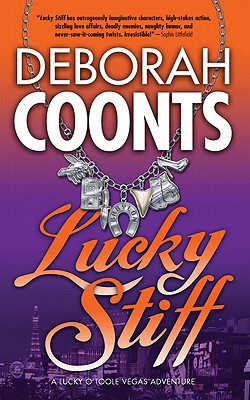 The next day, Lucky discovers Ms. Neidermeyer was tossed into the shark tank at the Mandalay Bay Resort as a snack for the Tiger Shark. When the police show up at the Babylon with a hastily prepared search warrant, applied for by the District Attorney himself, and Jeremy lands in the hot seat, Lucky realizes her previous night was far from routine.

Amid the chaos of fight weekend, the hiring of an eccentric new French chef, and her madam mother's intentions to auction off a young woman's virginity, Lucky is drawn into a deadly game where no one is what they seem, a game that will end only when she discovers who made fish-food out of Numbers Neidermeyer.

DEBORAH COONTS's mother tells her she was born in Texas a very long time ago, though she's not totally sure--her mother can't be trusted. But she was definitely raised in Texas on barbeque, Mexican food, and beer. She currently resides in Las Vegas, where family and friends tell her she can't get into too much trouble. Silly people. Coonts has built her own business, practiced law, flown airplanes, written a humor column for a national magazine, and survived a teenager.

“Las Vegas is the perfect setting for this witty tale of misdirection and larger-than-life characters. Fans of J. A . Konrath’s Jack Daniels series will love this.”
—Library Journal, starred review on Lucky Stiff

“Coonts covers Sin City territory with a dash of CSI and Janet Evanovich in her second glitzy, lighthearted novel.”
—Publishers Weekly on Lucky Stiff “Deliciously raunchy, with humorous takes on sexual proclivities, Vegas glitz and love, though Agatha Christie is probably spinning in her grave.”
—Kirkus Reviews on Wanna Get Lucky? “This is chick-lit gone wild and sexy, lightly wrapped in mystery and tied up with a brilliantly flashing neon bow.... Wanna Get Lucky? hits the proverbial jackpot.”
—Booklist “Funny, fast-paced, exuberant and brilliantly realized.”
—Susan Wiggs, New York Times bestselling author, on Wanna Get Lucky?