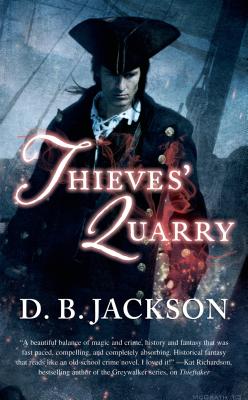 Ethan Kaille isn't the likeliest hero. A former sailor with a troubled past, Ethan is a thieftaker, using conjuring skills to hunt down those who steal from the good citizens of Boston. And while chasing down miscreants in 1768 makes his life a perilous one, the simmering political tensions between loyalists like himself and rabble-rousing revolutionaries like Samuel Adams and others of his ilk are perhaps even more dangerous to his health.
When one hundred sailors of King George III's Royal Navy are mysteriously killed on a ship in Boston Harbor, Ethan is thrust into dire peril. For he—and not Boston's premier thieftaker, Sephira Pryce—is asked to find the truth behind their deaths. City Sheriff Edmund Greenleaf suspects conjuring was used in the dastardly crime, and even Pryce knows that Ethan is better equipped to contend with matters of what most of Boston considers dark arts. But even Ethan is daunted by magic powerful enough to fell so many in a single stroke. When he starts to investigate, he realizes that the mass murderer will stop at nothing to evade capture. And making his task more difficult is the British fleet's occupation of the city after the colonials' violent protests after the seizure of John Hancock's ship. Kaille will need all his own magic, street smarts, and a bit of luck to keep this Boston massacre from giving the hotheads of Colonial Boston an excuse for inciting a riot—or worse.
Thieves' Quarry is a stunning second novel in D. B. Jackson's Thieftaker Chronicles.

“At once a gripping historical mystery and an inventive urban-style fantasy, the book should appeal to a wide spectrum of readers. More Ethan Kaille adventures would be most welcome.” —Booklist

“Thieftaker is an excellent blend of mystery and magic set in the turmoil of Colonial Boston as revolution brews and political factions collide. The setting is vividly painted, and the story is a fine portrait of a man caught between his bitter past and its legacy, and the constant dangers and reversals that dog his attempts to build a new life for himself.” —Kate Elliott, bestselling author of Cold Magic

“D. B. Jackson has masterfully woven history and fantasy to create a pre-revolutionary Boston that should have been. Peopled by an array of entertaining characters from conjurers to revolutionaries, Thieftaker is a compelling urban fantasy by a writer who knows what he's doing. I look forward to reading more of Ethan Kaille's adventures!” —C.E. Murphy, author of The Walker Papers series on Thieftaker

“Exploding the myth that the past was a simpler time, historical fantasist Jackson (pseudonym of David B. Coe, author of The Dark-Eyes' War) takes a tour of Boston's high and low life before the Revolution. Though Jackson's detailed attention to period language and Latin spell-casting is hampered by the tale's modern hard-boiled tone, he has produced a noteworthy series opener.” —Publishers Weekly on Thieftaker