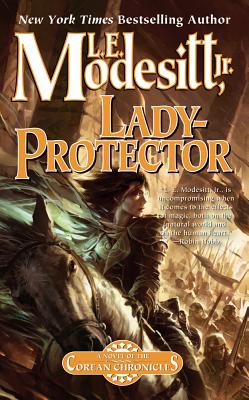 The Eighth Book of the Corean Chronicles

Millennia ago, a magical disaster caused the fall of a great worldwide civilization, the end of a golden age. New civilizations have fought their way up from the ancient destruction and chaos, knowing little of the lost world that preceded them or the details of its fall. Corus today is a world of contending countries, of humans, but also of strange animals and supernatural creatures. It is a place of magical powers, and of a few people who are talented enough to use them.

Though a bloody coup has made Mykella ruler of Lanachrona, it has left her and her two sisters bereft of family and uncertain of their friends. Worse, an examination of the nation's accounts reveals that their country is almost destitute, all while there are rumblings of war along the borders.

Other series by this author:
The Saga of Recluce
Imager Portfolio
The Spellsong Cycle
The Ghost Books
The Ecolitan Matter


Praise For Lady-Protector: The Eighth Book of the Corean Chronicles…

“Modesitt reveals again why success follows his novels. The characters are flawless, his world-building continues to enchant, and there is always plenty of conflict and mystery.” —RT Book Reviews on The Lord-Protector’s Daughter

“The characters have become more fascinating with each novel; moreover, this one includes even more action than either of its predecessors...which contributes mightily to bringing the adventures of Dainyl, Alector of Corus, and Mykel, an officer in the native military corps, to a stunning conclusion while leaving enough unanswered questions for many more Corean stories.” —Booklist, starred review on Soarer’s Choice

L. E. Modesitt, Jr., is the bestselling author of the fantasy series The Saga of Recluce, Corean Chronicles, and the Imager Portfolio. His science fiction includes Adiamante, the Ecolitan novels, the Forever Hero Trilogy, and Archform: Beauty. Besides a writer, Modesitt has been a U.S. Navy pilot, a director of research for a political campaign, legislative assistant and staff director for a U.S. Congressman, Director of Legislation and Congressional Relations for the U.S. Environmental Protection Agency, a consultant on environmental, regulatory, and communications issues, and a college lecturer. He lives in Cedar City, Utah.
Loading...
or support indie stores by buying on
(This book is on backorder)