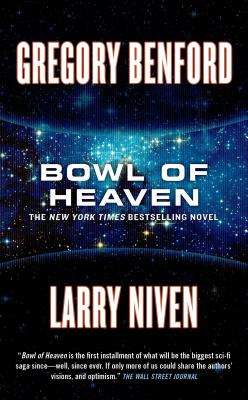 In Bowl of Heaven, the first collaboration by science fiction authors Larry Niven (Ringworld) and Gregory Benford (Timescape), the limits of wonder are redrawn once again as a human expedition to another star system is jeopardized by an encounter with an astonishingly immense artifact in interstellar space: a bowlshaped structure half-englobing a star, with a habitable area equivalent to many millions of Earths…and it's on a direct path heading for the same system as the human ship.


Praise For Bowl of Heaven: A Novel…

“Niven lifts the reader far from the conventional world—and does it with a dash.”

“The premier hard-SF writer of the day.”

“Benford is one of our best.”

“What sets Benford apart from most of the high-tech literary herd is his gift for characterization and language, his refusal to let gadgets overwhelm the people in his stories.... Benford never lets his characters become the animated cardboard cutouts that afflict too many hard science fiction stories.”