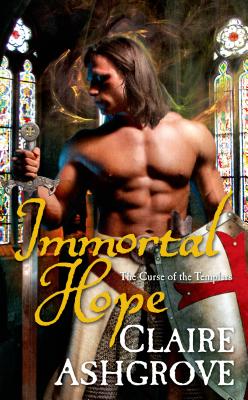 The Curse of the Templars

Centuries ago, Templar knights defied the archangels and unearthed the copper scroll that revealed the locations of the gates to hell. Cursed for their forbidden act, they now roam the earth, protecting mankind from evil. But darkness stalks them, and battles they fight bring them ever closer to eternal damnation. One promise remains to give them salvation--the return of the seraphs.

Embittered by his purpose, Merrick du Loire must honor an ancient pact and bring peace to his cousin's soul, releasing him from the clutches of their enemy. When he stumbles upon history professor Anne MacPherson, he discovers that she possesses a sacred artifact that marks her as a seraph. Duty demands he set aside his personal quest and locate the knight she's fated to heal. As Merrick struggles with conflicting oaths, Anne arouses buried hope and sparks forbidden desire that challenges everything he's sworn to uphold.

Anne has six weeks to complete her thesis on the Knights Templar. When Merrick takes her to the Templar stronghold, he presents her with all she needs--and awakens a soul-deep ache that he alone can soothe. Yet loving Merrick comes with a price. If she admits she is destined for him, her gift of foresight predicts his death.

Claire Ashgrove is an author and a mother to two wonderful boys. In her copious spare time, she raises and trains Oldenburg, Thoroughbred, and Arabian horses.
Loading...
or
Not Currently Available for Direct Purchase