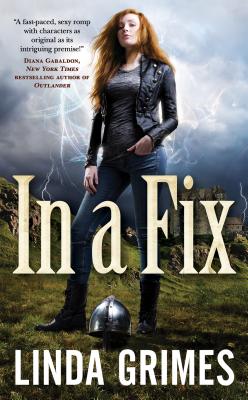 IN A FIX is the first of an original new urban fantasy series by LINDA GRIMES starring human chameleon Ciel Halligan.

Snagging a marriage proposal for her client while on an all-expenses-paid vacation should be a simple job for Ciel Halligan, aura adaptor extraordinaire. A kind of human chameleon, she's able to take on her clients' appearances and slip seamlessly into their lives, solving any sticky problems they don't want to deal with themselves. No fuss, no muss. Big paycheck.

This particular assignment is pretty enjoyable...that is, until Ciel's island resort bungalow is blown to smithereens and her client's about-to-be-fiancé is snatched by modern-day Vikings. For some reason, Ciel begins to suspect that getting the ring is going to be a tad more difficult than originally anticipated.

Going from romance to rescue requires some serious gear-shifting, as well as a little backup. Her best friend, Billy, and Mark, the CIA agent she's been crushing on for years—both skilled adaptors—step in to help, but their priority is, annoyingly, keeping her safe. Before long, Ciel is dedicating more energy to escaping their watchful eyes than she is to saving her client's intended.

Suddenly, facing down a horde of Vikings feels like the least of her problems.

“Fans of both hard and soft fantasy and crime drama will love [the] protagonist's spunky, irreverent attitude as well as Grimes's character-building skills and unusual storyline.” —Library Journal, starred review