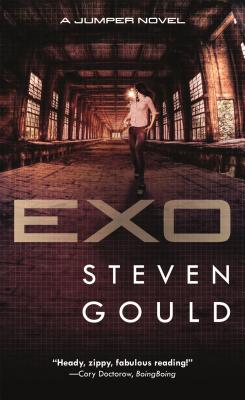 Award-winning author, Steven Gould, returns to the world of his classic novel Jumper in Exo, the sequel to Impulse, blending the drama of high school with world shattering consequences.

Cent can teleport. So can her parents, but they are the only people in the world who can. This is not as great as you might think it would be—sure, you can go shopping in Japan and then have tea in London, but it's hard to keep a secret like that. And there are people, dangerous people, who work for governments and have guns, who want to make you do just this one thing for them. And when you're a teenage girl things get even more complicated. High school. Boys. Global climate change, refugees, and genocide. Orbital mechanics.

But Cent isn't easily daunted, and neither are Davy and Millie, her parents. She's going to make some changes in the world.


Praise For Exo: A Jumper Novel…

“Steven Gould is one of the shining lights in contemporary science fiction, and I've long admired the worlds and characters he's created in his books and stories.” —James Cameron, Academy Award-winning director

“The question is, What is she prepared to risk in order to live the kind of life her special gift opens up for her? Like its predecessors, the novel straddles the line between YA and adult fiction; its lead character is a teen, but the story has many adult-themed elements, and its writing seems geared more toward older readers.... Fans of the series should give this one an enthusiastic response.” —Booklist on Exo

“Gould literally raises the bar on teleportation in this sequel to Impulse.... Gould grows more ambitious with every book in the Jumper series. He began by mixing speculative fiction, adventure and bildungsroman, then added in political and corporate thriller; this novel is primarily hard sci-fi while maintaining the other genres. By constantly experimenting with new tropes and extending the limits of the Harrison-Rice family's power to teleport, Gould ensures that each installment remains fresh and enthralling.... [Cent] has an intellectual and emotional validity as well as an inherent likability.... There's simply no knowing where Cent and this series are headed next...but it'll sure be interesting to find out.” —Kirkus Reviews, starred review, on Exo

“In the Jumper books, Steven Gould does a superb job of the old science fiction game of ‘what if?'--postulating a change, and then exhaustively examining all the implications…. Cent is a thoroughly modern teenager, intelligent and witty, irreverent and yet insecure. It's a pleasure to see her tackle a new challenge. As usual, Exo is more than a simple adventure story; issues of morality, responsibility, and personal growth suffuse the narrative. With any luck, this won't be the last story of the happy Rice family.” —Analog

“Steven Gould's young-adult novel 7th Sigma calls to mind Robert Heinlein--or even Rudyard Kipling…One thing that Gould, Heinlein and Kipling would all agree on is that a clever kid beats a fool adult any day. A young mind can absorb skills, techniques and practical knowledge--those are the basis of civilization, not metal and gadgets.” —The Wall Street Journal

“Jumper [is] one of those rare books that can be read as a YA or a book for adults; like Ender's Game or vintage Heinlein.” —Cory Doctorow

“A great science-fiction story that holds up to classic adult/YA crossovers; this is a must-read for any fans of the genre. With a strong female protagonist, interesting secondary characters, a bit of romance, some humor, and loads of action and adventure, Impulse will keep readers engaged from start to finish.” —School Library Journal, starred review

“Impulse is a cracking yarn; takes the world of Jumper to the next level.” —Charles Stross

“Delivers both a satisfying coming-of-age story and an entertaining tale of humans with extraordinary abilities running from a corrupt bureaucracy.” —RT Book Reviews on Impulse

“A great science fiction story that holds up to classic adult/YA crossovers, this is a must-read for any fans of the genre. With a strong female protagonist, interesting secondary characters, a bit of romance, some humor, and loads of action and adventure, Impulse will keep readers engaged from start to finish.” —School Library Journal, starred review

“[Gould's] gift is in writing about extraordinary things in a very ordinary way with humor and matter-of-factness and it's never been on display so much as here.... While Exo is still very much Gould's style, this time I also got a whiff of the space-station worldbuilding of Allen M. Steele and John Varley, and a strong flavor of the old Heinlein juveniles.... I read it in two big gulps, pulled along by the voices of the characters and the magnitude of what they were attempting.” —News-Journal, Daytona Beach

STEVEN GOULD is the author of the beloved classic Jumper, basis for the 2008 film of the same name, as well as Wildside, Helm, Blind Waves, Reflex, and Jumper: Griffin’s Story. He is the recipient of the Hal Clement Young Adult Award for Science Fiction and has been nominated for both the Hugo and the Nebula awards. Gould lives in New Mexico with his wife, writer Laura J. Mixon.
Loading...
or
Not Currently Available for Direct Purchase