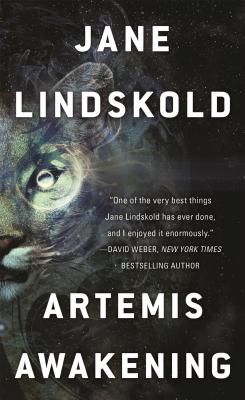 Artemis Awakening is the start of a new series by New York Times bestseller Jane Lindskold. The distant world Artemis is a pleasure planet created out of bare rock by a technologically advanced human empire that provided its richest citizens with a veritable Eden to play in. All tech was concealed and the animals (and the humans brought to live there) were bioengineered to help the guests enjoy their stay…but there was always the possibility of danger so that visitors could brag that they had "bested" the environment.

The Empire was shattered in a horrific war; centuries later humanity has lost much of the advanced technology and Artemis is a fable told to children. Until young archeologist Griffin Dane finds intriguing hints that send him on a quest to find the lost world. Stranded on Artemis after crashing his ship, he encounters the Huntress Adara and her psych-linked companion, the puma Sand Shadow. Their journey with her will lead Dane to discover the planet's secrets…and perhaps provide a key to give unimagined power back to mankind.

Jane Lindskold is the bestselling author of the Firekeeper series, which began with Through Wolf’s Eyes and concluded with Wolf’s Blood, as well as many other fantasy novels.  She lives in Albuquerque, New Mexico.
Loading...
or
Not Currently Available for Direct Purchase