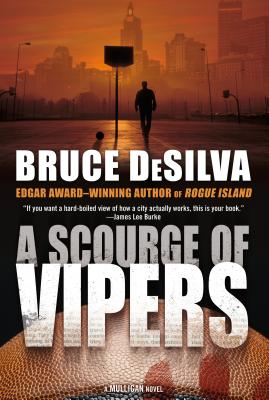 A Scourge of Vipers

Bruce DeSilva's A Scourge of Vipers is at once a suspenseful crime story and a serious exploration of the hypocrisy surrounding sports gambling and the corrupting influence of big money on politics.

To solve Rhode Island's budget crisis, the state's colorful governor, Attila the Nun, wants to legalize sports gambling; but her plan has unexpected consequences. Organized crime, professional sports leagues, and others who have a lot to lose—or gain—if gambling is made legal flood the state with money to buy the votes of state legislators.

Liam Mulligan, investigative reporter for The Providence Dispatch, wants to investigate, but his bottom-feeding corporate bosses at the dying newspaper have no interest in serious reporting. So Mulligan goes rogue, digging into the story on his own time. When a powerful state legislator turns up dead, an out-of-state bag man gets shot, and his cash-stuffed briefcase goes missing, Mulligan finds himself the target of shadowy forces who seek to derail his investigation by destroying his career, his reputation, and perhaps even his life.


Praise For A Scourge of Vipers: A Mulligan Novel (Liam Mulligan #4)…

“Edgar-winner DeSilva's excellent fourth Liam Mulligan novel (after 2014's Providence Rag) finds the Providence, R.I., investigative journalist on hard times professionally. His newspaper, The Dispatch, has been reduced to a shell of its former self, publishing fluff rather than substance and largely staffed by wet-behind-the-ears newcomers. His jerk of an editor, Charles Twisdale, is more concerned with the bottom line and advertising revenue than reporting the news, leaving Mulligan feeling like a dinosaur on the verge of extinction. But if that's to be his fate, the reporter is determined to go down swinging, pursuing the truth behind a series of murders that appear linked to the governor, colorfully known as "Attila the Nun," who hopes to solve the state's public-pension crisis by legalizing sports gambling. The lean prose and clever plotting will remind hard-boiled fans of Loren Estleman's Amos Walker novels.” —Publishers Weekly, Starred Review

“Rhode Island Governor Fiona McNerney proposes the legalization of sports betting to reduce the state's budget deficit. The mob opposes the idea because it would eat into its bookmaking business, and sports oversight groups claim it would open up games to dishonesty. After Atlantic City mobsters show up in Providence with bags of cash, presumably to influence legislators, veteran newspaper reporter Liam Mulligan investigates. When a state legislator and several other people turn up dead, Mulligan soon becomes a prime suspect in several murders. VERDICT DeSilva's Edgar and Macavity Award-winning books (most recently Providence Rag) is a consistently well-written hard-boiled series. Unfortunately, few of the regular characters have roles here. Still, this excellent addition features a bit of romance, a lot of action, plenty of snappy repartee, and social commentary on the fate of newspaper journalism and the corrupting role of money in the political process. Quality all the way.” —Library Journal, starred review

“A fourth chapter in the race to the bottom between the state of Rhode Island and Providence Dispatch reporter Liam Mulligan (Providence Rag, 2014, etc.).Ever since the Dispatch was purchased by General Communications Holdings International, Mulligan's career has been on life support. The only reason Managing Editor Charles Twisdale doesn't fire him is that he'd be eligible to collect unemployment while he beat the bushes for his next job. But the Ocean State is giving Mulligan a run for his money in the hard-luck stakes. Now that Mulligan's old pal Gov. Fiona McNerney, whose years in the convent earned her the sobriquet Attila the Nun, is considering a bill to legalize sports betting in Little Rhody, money is flooding into the state. The goal is to purchase--um, influence-- lawmakers on both sides of the issue; the effect is to throw the state's normal racketeering-cum-bribery apparatus, represented by Dominic "Whoosh" Zerelli, Mulligan's elderly bookmaker, into turmoil. Suspecting that the time has come to turn in his chips, Whoosh urges Mulligan to take over his book--a move that doesn't sit at all well with his great-nephew Mario Zerelli. And there are murders too--not of anyone worth mourning but enough to set a pair of cops Mulligan dubs the Homicide Twins on his tail. The fade-out finds Mulligan wondering whether to stake his future on the mean streets of Providence or the online reaches of the rival Ocean State Rag. The mystery this time is no more than a pendant to a frantic, funny, unsparing account of the corrosive power of big money on print journalism, state government and the fragile souls who fill out the cast. Enjoy it on those terms, and you'll be sorry when it's over.” —Kirkus

“A body fished out of a river. A body found in a small-plane crash. Both crime scenes are covered by Liam Mulligan, a bitter general-assignment reporter for a nearly defunct Rhode Island newspaper, The Providence Dispatch. Readers have seen Mulligan flex his investigative-reporting muscles before; the first in the series, the Edgar-winning Rogue Island (2010), set Mulligan against the forces of cable and Internet that have doomed newspapers. This time he saves his most virulent attacks for how mindless management now perverts journalism into a game played purely for profit. Meanwhile, Rhode Island's governor, a former member of the Little Sisters of the Poor, now referred to as Attila the Nun, wants to legalize gambling in the state. This sets off a spate of double crosses, bribes, and murders as organized-crime fights to keep hands on the money controls. DeSilva is spot-on, as only a journalist with a 40-year newspaper career behind him can be, when it comes to corruption. His dialogue, however, has everyone, including the former nun, sounding as if they've just completed a "Talk like a Martin Scorsese thug" course.” —Booklist

“Bruce DeSilva writes a story in the tradition of Hammett and Higgins, and he writes it with the knowledge of an old-time police reporter. DeSilva knows cops, corruption in eastern cities, wiseguys, rounders, bounders, gamblers, and midnight ramblers. He writes with authority about the issues of our times, and he does it with honesty and candor. His newsman protagonist feigns the role of the cynic but in his way represents the virtues most of us admire. If you want a hardboiled view of how a city actually works, this is your book.” —James Lee Burke

“Bruce DeSilva gives his smart and funny investigative sleuth something to live and fight for.” —New York Times Book Review