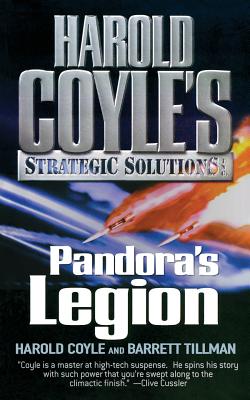 In this explosive new series from New York Times bestseller Harold Coyle and noted military author Barrett Tillman, a new type of war is being fought by private paramilitary companies at the beck and call of the highest bidder. With the military and intelligence agencies spread thin, the US is constantly calling upon the services of these organizations--and Strategic Solutions Inc. is among the best.
Members of Al-Qaida have set in place a vicious biological attack. Men and women infected with the highly communicable and deadly Marburg virus have been sent to major cities and sensitive locations throughout the world in hopes of creating a deadly, global epidemic.
The dedicated men and women of SSI, led by former Rear Admiral Michael Derringer, are consummate professionals, nearly all ex-police or military, and are the among the best in the world at what they do. But the mastermind behind the living bio-weapons, Dr. Saeed Sharif, is more deadly than anyone could have possibly imagined. Spread throughout the globe and thwarting attacks on their home facilities the staff at SSI soon find themselves engaged in a frontline game of ground warfare. And to make matters worse, two infected Marburg carriers are heading straight for the United States. Using every resource it has, SSI launches an all-out search for the walking plague carriers before thousands more become infected and die.
Posing a frightening scenario that could become all too real in the near future, and filled with the details of the military world that have made Coyle's books bestsellers, Pandora's Legion hits the front lines of the new war against terrorism in this engrossing, high-stakes novel.

New York Times bestselling author, Harold Coyle is a graduate of the Virginia Military Institute and spent fourteen years on active duty with the U.S. Army. His books include No Warriors, No Glory and They Are Soldiers. He lives in Leavenworth, Kansas.

Barrett Tillman is the author of many fiction and nonfiction books including, Clash of the Carriers and Hellcats. He lives in Mesa, Arizona.

“Coyle is best when he's depicting soldiers facing death . . . He knows soldiers and and he understands the brotherhood of arms mystique and transcends national boundaries.” —The New York Times