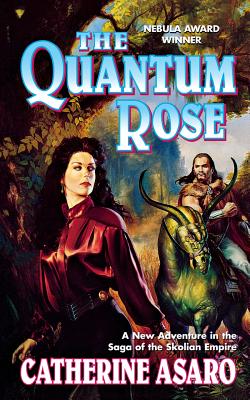 The Quantum Rose (Saga of the Skolian Empire #6)

From the author of Ascendant Sun, the Saga of the Skolian Empire continues in this Nebula Award-Winning Novel.

Kamoj Argali is the young ruler of an impoverished province on a backward planet. To keep her people from starving, she has agreed to marry Jax Ironbridge, the boorish and brutal ruler of a prosperous province. But before Argali and Ironbridge are wed, a mysterious stranger from a distant planet sweeps in and forces Kamoj into marriage, throwing her world into utter chaos.


Praise For The Quantum Rose (Saga of the Skolian Empire #6)…

“Fans of futuristic romance will revel in the delights of a top notch romantic adventure set against an impeccably crafted, richly imagined background. . . . Connoisseurs of good science writing, vivid imagery and powerful emotional intensity are in for a real treat.” —Romantic Times (4 1/2 stars)

Catherine Asaro received a doctorate in physics from Harvard University, has published a number of papers on theoretical physics and was a physics professor until 1990, when she established Molecudyne Research. A former ballerina, she has performed with ballets and in musicals on both coasts. She lives with her husband and daughter in Columbia, Maryland.
Loading...
or
Not Currently Available for Direct Purchase