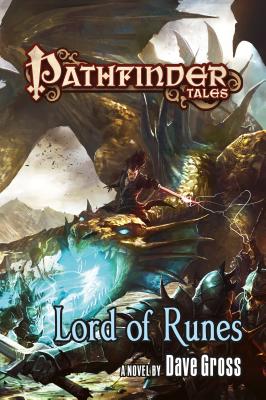 From bestselling author Dave Gross comes a fantastical tale of mystery, monsters, and mayhem in PATHFINDER TALES: LORD OF RUNES, set in the award-winning world of the Pathfinder Roleplaying Game.

Count Varian Jeggare and his hellspawn bodyguard Radovan are no strangers to the occult. Yet when Varian is bequeathed a dangerous magical book by an old colleague, the infamous investigators find themselves on the trail of a necromancer bent on becoming the new avatar of a strange and sinister demigod-one of the legendary runelords. Along with a team of mercenaries and adventurers, the crime-solving duo will need to delve into a secret world of dark magic and the legacy of a lost empire. But in saving the world, will Varian and Radovan lose their souls?

Dave Gross is the author of several Pathfinder Tales novels starring these characters, including the novels Prince of Wolves, Master of Devils, Queen of Thorns, and King of Chaos, plus short stories and novellas. He also co-wrote the Pathfinder novel Winter Witch with New York Times best-seller Elaine Cunningham, and has written several novels for Forgotten Realms and Privateer Press's Iron Kingdoms. He's worked on video games such as Baldur's Gate: Enhanced Edition and has edited such magazines as Dragon, Star Wars Insider, and Amazing Stories.
Loading...
or support indie stores by buying on