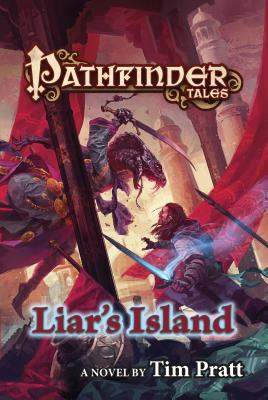 Rodrick is a con man as charming as he is cunning. Hrym is a talking sword of magical ice, with the soul and spells of an ancient dragon. Together, the two travel the world, parting the gullible from their gold and freezing their enemies in their tracks. But when the two get summoned to the mysterious island of Jalmeray by a king with genies and elementals at his command, they'll need all their wits and charm if they're going to escape with the greatest prize of all-their lives.

TIM PRATT is an American science fiction and fantasy writer, born December 12, 1976. His short fiction has been nominated for the Nebula Award and the World Fantasy Award, and his story "Impossible Dreams" won the Hugo Award in 2007. His story "Hart & Boot" was selected by Michael Chabon for Best American Short Stories 2005 (Houghton Mifflin, 2006). Some of Pratt's short fiction is collected in Little Gods (Prime Books, 2003) and Hart & Boot & Other Stories (Night Shade Books, 2007). As "T. A. Pratt," he has published four urban fantasy novels about sorceress Marla Mason: Blood Engines, 2007; Poison Sleep, 2008; Dead Reign, 2008; and Spell Games, 2009, all from Bantam Spectra. As Tim Pratt, he is the author of the idiosyncratic fantasy novel The Strange Adventures of Rangergirl (Bantam Spectra, 2005). Tim Pratt lives in Oakland, California, where he works as a senior editor of Locus, the trade magazine of the science fiction field.
or support indie stores by buying on
Copyright © 2020 American Booksellers Association