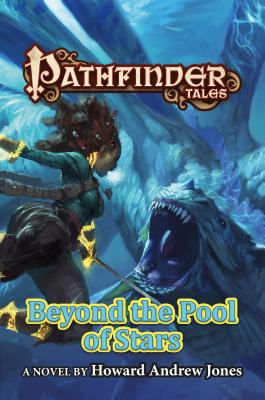 Beyond the Pool of Stars

From critically acclaimed author Howard Andrew Jones comes a fantastical adventure of deep-water danger and unlikely alliances in Pathfinder Tales: Beyond the Pool of Stars, set in the award-winning world of the Pathfinder Role playing Game.

Mirian Raas comes from a long line of salvagers, adventurers who use magic to dive for sunken ships off the coast of tropical Sargava. When her father dies, Mirian has to take over his last job: a dangerous expedition into deep jungle pools, helping a tribe of lizardfolk reclaim the lost treasures of their people. Yet this isn't any ordinary job, as the same colonial government that looks down on Mirian for her half-native heritage has an interest in the treasure, and the survival of the entire nation may depend on the outcome...

HOWARD ANDREW JONES, when not helping run his small family farm or spending time with his amazing wife and children, is hunched over his laptop or notebook mumbling about flashing swords and doom-haunted towers. His novels include The Chronicles of Sword and Sand (The Desert of Souls, The Waters of Eternity, The Bones of the Old Ones) and several Pathfinders Tales. He has worked as a TV cameraman, a book editor, a recycling consultant, and a college writing instructor. He edited eight collections of Harold Lamb’s historicals and served as managing editor of Black Gate. He edits the sword and sorcery magazine Tales from the Magician’s Skull.
Loading...
or support indie stores by buying on