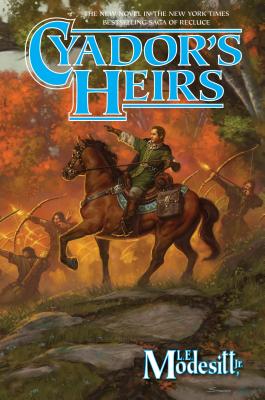 L.E. Modesitt, Jr.'s Cyador's Heirs continues his bestselling fantasy series the Saga of Recluce, which is one the most popular in contemporary epic fantasy.

Decades after the fall of Cyador, its survivors have reestablished themselves in Cigoerne. Young Lerial, living in the shadow of his older brother and heir Lephi, has a preordained future: He will one day command his brother's forces in defense of Cigoerne, serving at his older sibling's pleasure, and no more.

But when Lerial is sent abroad to learn the skills and wisdom he will need to fulfill his future duties, he discovers he is one of those rare beings who can harness both Order and Chaos. And as war finally engulfs the fringes of Cigoerne, Lerial's growing mastery of Order and Chaos is tested to its limits, and his own.

“An intriguing fantasy in a fascinating world.”—Robert Jordan, New York Times bestselling author of The Wheel of Time® series

Other Series by L.E. Modesitt, Jr.
The Imager Portfolio
The Corean Chronicles
The Spellsong Cycle
The Ghost Books
The Ecolitan Matter

"Cyador's Heirs does not disappoint, building on the stories of the grandchildren of the great matriarch in the Recluse saga from childhood to early adulthood." —RT Book Reviews