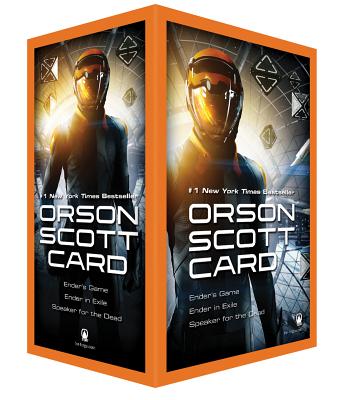 Ender's Game, Ender in Exile, Speaker for the Dead (The Ender Quintet)

Ender’s Game is an international bestseller, read and loved by generations. It has been named one of the top ten science fiction novels of all time. Andrew “Ender” Wiggin thinks he is playing computer simulated war games, at Earth’s elite military academy, the Battle School; he is, in fact, engaged in something far more desperate. Ender may be the military genius Earth desperately needs in a war against an inscrutable alien that seeks to destroy all human life. Ender Wiggin is six years old when it begins. He will grow up fast.

Ender’s story continues in Speaker for the Dead, Orson Scott Card’s award-winning sequel. Ender Wiggin has run far and fast, using the effects of near-light-speed travel to out-live his past and become nearly anonymous. He is now the Speaker for the Dead, the author of The Hive Queen and The Hegemon, and he has come to the planet Lusitania to tell the truth about a man’s life at his graveside.

Ender in Exile is the story of Ender’s first voyage from Earth, and his first arrival on a former Formic colony. In the confined world of the colony ship, Ender’s diplomatic and tactical genius are put to the test against an enemy he cannot kill. This novel falls immediately after Ender's Game in chronological sequence, but was written long after Children of the Mind, and the books of the Shadow series. You can read it at any point after Ender's Game