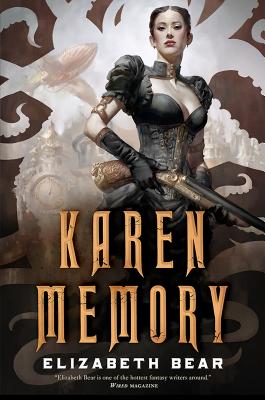 "You ain't gonna like what I have to tell you, but I'm gonna tell you anyway. See, my name is Karen Memery, like memory only spelt with an e, and I'm one of the girls what works in the Hôtel Mon Cherie on Amity Street. Hôtel has a little hat over the o like that. It's French, so Beatrice tells me."

Set in the late 19th century—when the city we now call Seattle Underground was the whole town (and still on the surface), when airships plied the trade routes, would-be gold miners were heading to the gold fields of Alaska, and steam-powered mechanicals stalked the waterfront, Karen is a young woman on her own, is making the best of her orphaned state by working in Madame Damnable's high-quality bordello. Through Karen's eyes we get to know the other girls in the house—a resourceful group—and the poor and the powerful of the town. Trouble erupts one night when a badly injured girl arrives at their door, beggin sanctuary, followed by the man who holds her indenture, and who has a machine that can take over anyone's mind and control their actions. And as if that wasn't bad enough, the next night brings a body dumped in their rubbish heap—a streetwalker who has been brutally murdered.

Bear brings alive this Jack-the-Ripper yarn of the old west with a light touch in Karen's own memorable voice, and a mesmerizing evocation of classic steam-powered science.

“This lean, sinewy, visceral narrative, set forth in extraordinarily vivid prose full of telling detail, conveys a remarkable sense of time and place, where the characters belong to the landscape and whose personalities derive naturally from it.… Gripping, perfectly balanced and highly recommended.” —Kirkus Reviews, starred review, on Range of Ghosts

“Elizabeth Bear launches a trilogy in a fantastic new world with this compelling tale.… Bear creates a vivid world where wizards must sacrifice their ability to procreate in order to control magic and the sky changes to reflect the gods of the land's rulers.” —Publishers Weekly on Range of Ghosts

“Her characters possess depth of feeling as well as political acumen, bringing a personal element to a broad-scale epic fantasy…. Highly recommended.” —Library Journal on Range of Ghosts

“Her language, a celebrated feature in all of her writing, shines here in her descriptions of the setting…. Like George R.R. Martin, Bear presents third-person limited viewpoints from multiple characters, a strategy that allows her to delve deep into their heads without losing her own distinctive poetic narrative voice.” —The DC Spotlight