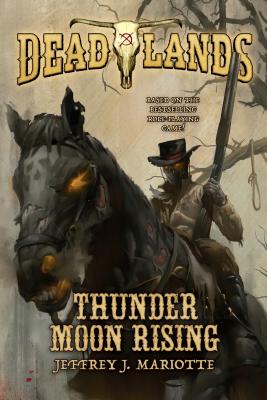 Fear is abroad in the Deadlands as a string of brutal killings and cattle mutilations trouble a Western frontier town in the Arizona Territory, nestled in the forbidding shadow of the rugged Thunder Mountains. A mule train is massacred, homes and ranches are attacked, and men and women are stalked and butchered by bestial killers who seem to be neither human nor animal, meanwhile a ruthless land baron tries to buy up all the surrounding territory-and possibly bring about an apocalypse.

Once an officer in the Union Army, Tucker Bringloe is now a worthless drunk begging for free drinks at the corner saloon. When he's roped into a posse searching for the nameless killers, Tuck must rediscover the man he once was if he's to halt the bloodshed and stop occult forces from unleashing Hell on Earth . . . when the Thunder Moon rises.

JEFFREY J. MARIOTTE is the award-winning author of more than fifty novels, including thrillers Empty Rooms and The Devil’s Bait, supernatural thrillers Season of the Wolf, Missing White Girl, River Runs Red, and Cold Black Hearts, horror epic The Slab, the Dark Vengeance teen horror quartet, and others. With writing partner (and wife) Marsheila Rockwell, he wrote the science fiction/horror/thriller 7 SYKOS, and has published numerous shorter works. He also writes comic books, including the long-running horror/Western comic book series Desperadoes and original graphic novels Zombie Cop and Fade to Black. He has worked in virtually every aspect of the book business, and is currently the editor-in-chief of Visionary Comics.
Loading...
or
Not Currently Available for Direct Purchase