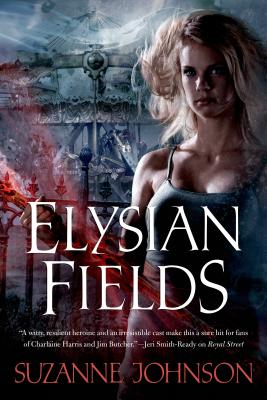 Elysian Fields by Suzanne Johnson is the fun, fast-paced third book in the Sentinels of New Orleans, a series of urban fantasy novels filled with wizards, mermen, and pirates.

These novels are perfect for readers of paranormal fiction and "fans of Charlaine Harris and Cat Adams" (Booklist) and RT Bookreviews agrees that "for readers missing Sookie Stackhouse, this series may be right up your alley."

New Orleanians are under attack from a copycat killer mimicking the crimes of a 1918 serial murderer known as the Axeman of New Orleans. Thanks to a tip from the undead pirate Jean Lafitte, DJ Jaco knows the attacks aren't random—an unknown necromancer has resurrected the original Axeman of New Orleans, and his ultimate target is a certain blonde wizard. Namely, DJ.

“Solid plotting and a well-described, consistent setting make this a strong and intriguing addition to the genre.” —Publishers Weekly on River Road

“[Johnson] does a brilliant job of bringing her fantasy version of New Orleans to life. An enchanting examination of magic and the people who wield it, River Road is a book to be savored. This second novel in the Sentinels of New Orleans series is a page-turner all by itself, but don't cheat yourself by missing out on Royal Street, its predecessor.” —RT Book Reviews, on River Road

“A resourceful heroine who relies on her magical ingenuity. . . . The author captures Katrina's devastation and the long recovery of a city's resilient people.” —Library Journal, starred review on Royal Street

“Suggest this fast, fun, and engaging fantasy-thriller to fans of Charlaine Harris and Cat Adams.” —Booklist on Royal Street

“Unplug the phone. Turn off the TV. You won't want to be interrupted. I read it in one sitting. A thoroughly enjoyable world and a likeable heroine make for a fun read.” —Cat Adams, author of Siren Song, on Royal Street

Suzanne Johnson lives in Auburn, Alabama, and works as associate editor of Auburn Magazine. She is a veteran journalist with more than fifty national awards for writing and editing nonfiction. She is the author of the urban fantasy novels Royal Street and River Road.
Loading...
or support indie stores by buying on