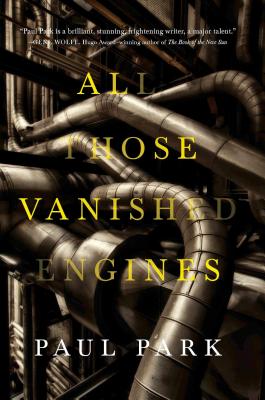 All Those Vanished Engines

Literary science fiction at its finest, a novel of three alternate histories, from the Civil War to the future.

In All Those Vanished Engines, Paul Park returns to science fiction after a decade spent on the impressive four-volume A Princess of Roumania fantasy, with an extraordinary, intense, compressed SF novel in three parts, each set in its own alternate-history universe. The sections are all rooted in Virginia and the Battle of the Crater, and are also grounded in the real history of the Park family, from differing points of view. They are all gorgeously imaginative and carefully constructed, and reverberate richly with one another.

The first section is set in the aftermath of the Civil War, in a world in which the Queen of the North has negotiated a two-nation settlement. The second, taking place in northwestern Massachusetts, investigates a secret project during World War II, in a time somewhat like the present. The third is set in the near-future United States, with aliens from history.


Praise For All Those Vanished Engines…

PAUL PARK is the author of A Princess of Roumania, and numerous other novels. He published his first novel in the 1980s and swiftly attracted notice as one of the finest authors on the "humanist" wing of American SF. His powerful, densely written narratives of religious and existential crisis on worlds at once exotic and familiar won him comparisons with Gene Wolfe and Brian Aldiss at their best. He lives in North Adams, Massachusetts.
Loading...
or support indie stores by buying on