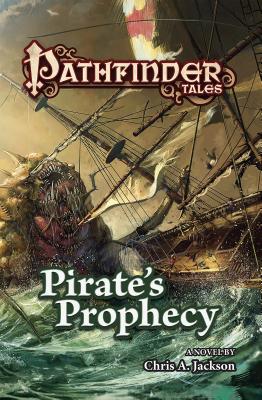 Paizo Publishing is the award-winning publisher of fantasy role playing games, accessories, and board games. Pathfinder Tales: Pirate's Prophecy is the continuation of their popular novel series.

Captain Torius Vin and the crew of the Stargazer have given up the pirate life, instead becoming abolitionist privateers bent on capturing slave ships and setting their prisoners free. But when rumors surface of a new secret weapon in devil-ruled Cheliax, are the Stargazers willing to go up against a navy backed by Hell itself?

CHRIS A. JACKSON is the author of the Pathfinder Tales novels Pirate's Honor and Pirate's Promise. His self-published and small-press work includes the Scimitar Seas and Weapon of Flesh series, which have won three consecutive gold medals in the Forewords Reviews Book of the Year awards, as well as becoming Kindle best sellers. Jackson has also written a novella set in Privateer Press's RPG fiction line. He lives on a sailboat in the Caribbean.
Loading...
or support indie stores by buying on